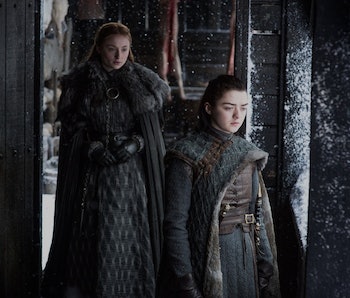 The Game of Thrones Season 7 finale was already the longest episode in the history of the series, but a cut scene could’ve made the 79-minute epic even longer — and it would’ve explained a mildly confusing plot twist.

Seeing Arya and Sansa fall for Littlefinger’s bullshit and go at one another’s throats for most of the season was frustrating for many viewers, but it was arguably worth it when the two Stark daughters teamed up and turned the tables on Petyr Baelish. Although the moment was undeniably awesome, it’s a little unclear when Sansa, Arya, and their brother/human computer Bran all got together to sort things out and end up on the same side. In an interview with Variety Isaac Hempstead Wright, who plays Bran, explained that they filmed that scene and it didn’t make the final episode.

“We actually did a scene that clearly got cut, a short scene with Sansa where she knocks on Bran’s door and says, ‘I need your help,’ or something along those lines,” Hempstead Wright explained. “So basically, as far as I know, the story was that it suddenly occurred to Sansa that she had a huge CCTV department at her discretion and it might be a good idea to check with him first before she guts her own sister. So she goes to Bran, and Bran tells her everything she needs to know, and she’s like, ‘Oh, s—.’”

Hempstead Wright’s comments seem to confirm that Arya and Sansa weren’t secretly pretending to go along with Littlefinger’s ruse the whole time, as some suspected. Seeing Sansa and Bran actually work this out would’ve made for a nice scene that could’ve helped made the Winterfell plot feel a little more organic, but it also would have made their turn on Littlefinger less shocking.

It’s kind of Season 7 in a nutshell. The story moved fast enough that the showrunners had to leave out so much connective tissue and included some overly convenient plot points, which made the season as a whole feel less cohesive than earlier seasons. That style of storytelling, though, allowed for some great, great moments.