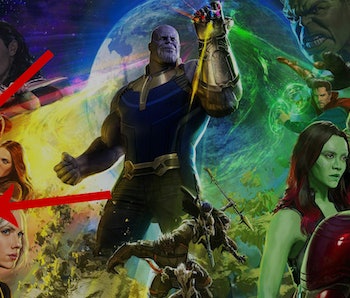 Marvel dropped the first official poster for Avengers: Infinity War at 2017’s San Diego Comic-Con. The intense imagery of the poster sparked a lot of questions (“Where is Ant-Man?”; “Why is Black Widow blonde?”), but the biggest focus by far was on Steve Rogers’ Captain America.

Yep, Captain America’s got a beard. What does this mean?

Well, it definitely means more than you might initially realize. Taking into account the losses Steve has recently undergone in the MCU and his general character arc from hero to vigilante, Steve Rogers has been through a lot.

In his first run as “God’s righteous man,” Steve popped out of Howard Stark’s Project Rebirth machine with a hairless chest and zero facial hair and has continued the trend ever since. We’ve never seen Steve Rogers with any facial hair (or body hair, for that matter).

Last time anyone saw Steve, he’d just broken into a secure government facility, the Raft, to get his pals Sam Wilson/Falcon (Anthony Mackie), Scott Lang/Ant-Man (Paul Rudd), Wanda Maximoff/Scarlet Witch (Elizabeth Olsen), and Clint Barton/Hawkeye (Jeremy Renner) out of superhero jail at the end of Captain America: Civil War. He didn’t have a beard, but he did look super intense and ready to cause some problems for the U.S. government.

Apparently, he had some time to shave in between missions.

Then came the Infinity War poster. Steve’s hair, longer and darker than ever before, is pushed away from his face, accented by this heavy beard that turned the world on its axis.

Down the Psychological Rabbit Hole

There are two ways to look at Steve’s beard: the properties of male dominance (beards make you look tough) and the psychology of loss (Steve’s been through a lot).

According to a 1970 study by Professor R.D. Guthrie, Ph.D., “Evolution of human threat display organs,” beards intimidate “rival males” by increasing the rival’s perception of jaw size, the length of the face, and by making threatening, jaw-thrusting behaviors more visible to said rival. Similarly, Nigel Barber, Ph.D., found in a 2016 study that men who let their facial hair grow were perceived as more dominant than others.

In the case of the MCU, Steve’s obvious “rival” of late is Tony Stark’s Iron Man (Robert Downey Jr.). It makes quite a bit of sense that Steve might be looking to (without realizing it) intimidate Tony and the other macho males he’s found himself up against.

Meanwhile, The Nature of Grief: The Evolution and Psychology of Reactions to Loss by John Archer pinpoints two kinds of reactions to loss and grief: “One, associated with a sudden and traumatic death or a dependent relationship, involved intense and prolonged grieving; the other, associated with the suppression of painful thoughts or an ambivalent relationship, involved delayed grief.”

Steve’s removal of the Captain America trademarks (the patches from his uniform, his shield, the clean-cut military look) is a big deal. If you think about it, Steve’s entire identity is tied up in his role as Captain America. After spending 70 years on ice and being forced to slowly gain traction in the 21st century, Steve leaned hard into the Cap mantle. The only things (or, rather, people) that pulled him out of his regular scheduling as Cap were Peggy Carter (whom he had a “dependent relationship” with) and Bucky Barnes (whom he initially lost in a “sudden and traumatic death” and whom he had to give up again).

Steve was also forced to delay his grief (“suppression of painful thoughts”) throughout Civil War as he attempted to do what he saw as the right thing — perhaps to his detriment.

As of the end of Civil War, Peggy is dead, Bucky is on ice, and Steve’s thrown down his shield, leaving him without any anchors in the 21st century. He’s probably dealing with both identified reactions to grief and loss.

All of that is to say: This could be a depression beard.

But, Really, the MCU Hasn’t Ever Been That Complicated

In reality, Steve’s beard is probably a result of his new, rough lifestyle. Since being pulled from the ice at the end of The First Avenger, Steve hasn’t wanted anything, really. He’s had the world at his fingertips and been living pretty simply (if you discount all the disasters and world-saving). Now, he’s on the run from Tony Stark, Secretary of State Thaddeus Ross (William Hurt), and everyone else in the world attempting to uphold the Sokovia Accords. Steve, a former American icon, is now a fugitive.

And with that fugitive status comes a probable, important change in his character. Sure, Steve Rogers will probably still stand for truth, justice, and the American way (sorry, Clark), but now he’s doing it on his own terms; he threw down his shield at the end of Civil War, he’s ripped the Avengers insignias off his tactical suit, and he’s got a thick beard and long hair for Infinity War.

Shit’s gone down for Steve Rogers, and the best way to communicate that to viewers is through a staunch visual (aka a super manly beard).

This new reality of bearded Captain America might have come as a surprise to casual Marvel fans, but the MCU fandom knows all too well that bearded Cap reaches further back than the Infinity War poster.

Y’all partly have Star-Lord (Chris Pratt) to thank for this one.

Back in 2015, Evans (a huge New England Patriots fan) and Pratt (a Seattle Seahawks guy) famously wagered a friendly bet over the outcome of the 2015 Super Bowl. Whoever’s team lost the game would have to dress up as his respective MCU hero and visit a children’s hospital (those rat bastards).

Alas, the Pats won the 2015 Bowl, but Evans, always a good sport, still dressed up in his Avengers: Age of Ultron uniform and visited Seattle Children’s Hospital. And because he wasn’t filming an Avengers movie at the time, he wasn’t clean-shaven.

Obviously, the MCU fandom lost its collective shit at this display of Chris-centric love; Evans dressed up in his Cap gear while hugging children isn’t something you see every day. Evans’ good deed sparked a deluge of bearded Captain America fan art, fan fiction, and general unrest on fandom-heavy sites such as Twitter and Tumblr. But the drama of the Super Bowl bet was nothing compared to the theatrics that ensued post-Infinity War poster.

Just think about how bad it’s going to be when we finally get an official trailer. And does this mean Steve isn’t waxing his chest anymore?

Avengers: Infinity War is expected to premiere in theaters on May 4, 2018.

If you liked this article, check out this video of the rookie’s guide to Luke Cage.