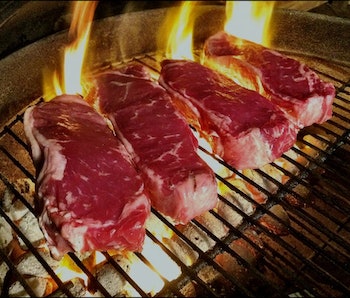 The Labor Day long weekend draws the long, hot summer to a close, serving up one final occasion to gorge yourself with fistfuls of smoky, salty, char-broiled meat. Going full-tilt carnivore, however, has its drawbacks — in particular, the sudden flush of heat and the beating of perspiration on your flesh as you realize you’ve fallen prey to the meat sweats.

In 2016, Inverse looked into the biological basis of the meat sweats, and our findings, more relevant than ever, are published below.

It’s true that there isn’t a ton of actual science on the physiology of the meat sweats, which has led some to conclude that they are an old wives’ tale or a myth. But myths typically come from somewhere and professional eaters and anyone who’s chowed down a little too hard at a free barbecue will swear that the meat sweats are the real deal.

The most persistent and sciencey-sounding explanation of the meat sweats is this: It is the result of thermogenesis, the internal production of heat that results from the work your body must do to digest the food you eat. Proteins are harder to digest than carbohydrates or fats, so a particularly protein-rich meal is going to warm you up more, potentially tipping you into the sweat zone.

It makes sense on the surface, but it’s unlikely to be the whole story. Fats and carbs use up about 5-10 percent of their energy content compared with closer to 30 percent for protein. Let’s assume you have a meal in front of you that is two kilograms (4.4 pounds) of pure protein. Each gram of protein has four calories, so you’re looking at an 8,000 calorie meal. Your body burns 30 percent of that, or 2,400 calories, in digestion. One calorie is defined as the amount of energy required to raise the temperature of one gram of water by one degree Celsius. Spread those 2,400 calories out over the body of a 90-kilogram (198-pound) man, who is mostly made of water, and you get a temperature rise of just 0.03 degrees Celsius, or 0.05 degrees Fahrenheit.

So yes, eating a whole load of meat will warm you up, but only slightly. So what makes guys who cram hot dogs down their throats erupt with moisture? The answer is probably stress.

Filling your stomach to the brim and then some is rough on the body. Stressing your internal systems causes the release of hormones, like cortisol, that ramp up metabolic function and therefore warm you up like a revved engine. And eating, especially when you’re forcing it down, isn’t exactly a sedentary activity. All of your body movement can add up to a mini exercise session, especially if you don’t workout on the reg. Add to that the psychological stress of public competition, and you’ve got a recipe for a sweaty dash to the finish line.

A lot of things can conspire in perspiration. What’s the air temperature? Is the sun out? What’s the temperature of the food you’re ingesting? Is it spicy? How much are you pushing yourself beyond your natural limits? All of these things will play a role in how hot you feel at the end of a meal, and meat sweats are far from guaranteed. A Buzzfeed experiment failed to induce actual sweat beads in both a competitive eater and staff guinea pigs, despite the insistence of the competitive eater that meat sweats are the real deal.

So: It’s complicated. If you push your body past its breaking point, it will push back, but what exactly that looks like will depend on the conditions of the experiment. Until someone puts some rigorous scientific testing to the theories, meat sweats will remain part myth, part scientific mystery.