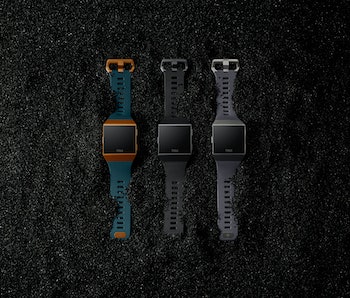 Not too long ago, if you were going to wear something high-tech on your wrist, chances were it was a Fitbit. The fitness tracker dominated the wearables market for years, but the recent emergence of the Apple Watch has forced Fitbit to step up its game with a bunch of new products, adding some smart watch luxury to its reliable old wearable. And on Monday, it debuted the Ionic, the newest Fitbit smart watch.

In the process, the company might finally answer an all-important question: Why, exactly, would anyone buy a smart watch?

The Apple Watch and its rival products haven’t bombed exactly, with total wearable usage in the United States estimated at about 40 million people a month. But that’s well below the original estimate that 64 million would wear the product, and it’s tricky to tell what portion of the non-Fitbit wearable market comes from manufacturers bundling the watches with their smartphones. The Apple Watch, though, looks to be gaining steam, and the launch of the Fitbit Ionic appears to be the company’s acknowledgment that the future of wearables is more smart watch, less fitness tracker.

Some of the Ionic’s promised features are very much those of a souped-up health monitor, including the device’s ability to keep track of the wearer’s sleep cycle. But the watch also has news apps, message notifications, and Fitbit Pay, which means users don’t have to take money with them when they go work out.

And therein lies the potential answer to the basic question about smart watches. These devices can feel like an unnecessary extra device when you can just reach into your pocket or your bag to get out your phone. But if you’re going out for a run, there’s real value in being able to leave phone and wallet at home.

With its smart watch, Apple is selling another aspect of its lifestyle brand. Just as an iPad was a bigger, more home-friendly variation on the iPhone, so too is the Apple Watch a wrist-mounted extension of the phone. The latter is a tougher sell unless you’re specifically thinking of times you wouldn’t want to carry your phone around — a scenario Apple understandably would prefer customers not think too much about.

Fitbit, on the other hand, is a fitness brand first and foremost, and so it’s a lot easier to see how a smart watch version of its original tracker could be of use. Even when you’re not out for a run, there’s a fairly simple logic in saying a wearable like the Fitbit Ionic is your all-purpose health device.

Given how well the classic Fitbit has performed, it’s not a hard sell to think the Ionic can handle those tasks, without running into the Apple Watch’s problem of reminding users of all the things an iPhone can do that it can’t.

Not that the Ionic can necessarily handle everything, a point Fitbit implicitly made Monday with the launch for another new product, its smart weight scale Aria 2. The scale connects wirelessly with the user’s other devices to help chart weight loss goals, with lots of in-depth data along the way. But what’s the device with which people in the video are syncing their Aria 2 data? Yeah, it’s still an iPhone.

It remains to be seen how well the Ionic does, both in terms of sales and the product’s actual performance. This represents a big leap for a company that had perfected a more straightforward version of wearable tech, and announcing oneself as a new rival to Apple is never easy.

The company’s other new product, the Fitbit Flyer, aims to provide wireless headphones that can work well in a workout setting. If nothing else, they look rather more substantial and harder to lose than Apple’s AirPods.

As ever, the proof will be in the wearing — but at least Fitbit’s core appeal as the fitness tracker might make its smart watch an easier sell.

More like this
Innovation
8.1.2022 9:00 PM
This mind-bending material could turn us into chameleons
By Molly Glick
Mind and Body
8.6.2022 1:00 PM
The 8 Best Apple Watch bands for working out
By Vanessa Spilios
Mind and Body
7.28.2022 7:10 PM
This ultrasound ‘sticker’ may revolutionize health care
By Miriam Fauzia
Related Tags
Share: