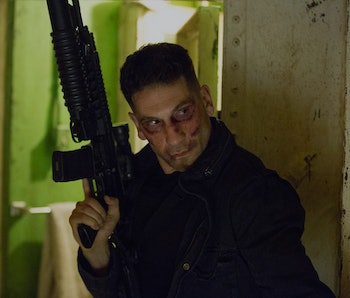 Frank Castle is headed back to New York City for his standalone Netflix series The Punisher. The only problem is that fans don’t know exactly when he’ll be back — and Netflix is all too happy to play into fans’ frustrations.

Of course, once fans started interpreting the message and sharing what it meant with one another, the next big question became: what Punisher news? Long-time Punisher fans, the ones who have been savagely monitoring every piece of Punisher news out there, know the series will be appropriately bloody and violent. But other than that, Netflix hasn’t released much info, so the big Punisher news could be anything.

Up until Monday, the most recent news about Netflix’s upcoming standalone Punisher series was a random teaser at the end of the final episode of The Defenders. Much like the rest of the show’s marketing, it gave very little away about what to expect from the series.

The new teaser, a series of images, news stories, and classified government documents in black and white, teases a mystery of epic proportions in The Punisher.

But, we’re still without a premiere date.

The Punisher is expected to premiere sometime in 2017.