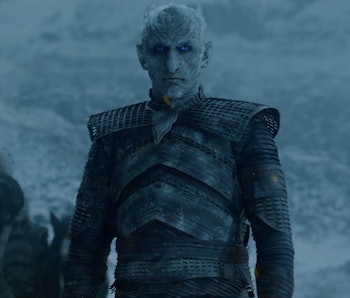 Jon Snow’s plan to venture “Beyond the Wall” to capture a wight to show Cersei was always a little hairbrained, but it fell apart in an especially epic fashion. It was only thanks to Gendry’s swift feet and Daenerys’ intervention that his crew was able to escape, but one of Dany’s died in the process. But did Jon’s plan crash and burn so bad because he’d fallen right into the Night King’s trap?

The most shocking moment of the seventh season’s penultimate episode was certainly when the Night King calmly and coolly threw an ice spear with the speed and accuracy of a tactical missile and nailed Viserion. The dragon fell to the ground and sank to the bottom of an icy lake. At the end of the episode, the Night King brought the dead dragon back to life as a wight. It was a game-changing moment, though if you look closely there’s evidence that the Night King saw it coming, and he meant to have three dragon wights instead of just the one.

We saw the Night King hurl a second ice spear at Drogon as it flew away, with the entire crew (minus Jon) on its back. Drogon managed to dodge it, perhaps having learned from his encounter with Qyburn’s scorpion during the Loot Train battle. But during the earlier scene, where Beric Dondarrion said they should try to take out the Night King in order to stop all the White Walkers, we see that he has exactly three ice spears.

Even though there are two other White Walkers who could, in theory, be holding additional ice spears, they’re armed with swords. Given that the ice spear that hit Viserion was a one-hit KO, it’s possible that these aren’t ordinary weapons. Perhaps they’re rare, take a long time to craft, or are imbibed with special magic. In any case, he only had three of them, and there’s a simple explanation for that: Dany only has three dragons.

The extent of the Night King’s powers still hasn’t been fully revealed, but we’ve seen how he interacts with Bran’s Three-Eyed Raven powers. Perhaps the Night King is a greenseer and knew Jon was coming, and that Dany’s dragons would come rescue him if he kept them trapped. He also had those massive chains on hand, so it’s not crazy to think he had some sort of prior knowledge about what was going to go down. Or, maybe once they were trapped the Night King used basic warging powers to spy on Gendry fleeing to Eastwatch and made the plan from there, knowing the dragons would be on the way.

If the Night King and his army of wights had wanted to get to Jon and company on their little island in the middle of the icy lake, they could have. The dead are disposable troops. Use ‘em to build a bridge or, heck, use the White Walkers’ wintery powers to freeze the water again. No, it seems that the Night King was deliberately waiting until dragons were on the way. He wanted to take all three down by using his three spears.

Maybe he overestimated his throwing capabilities, though. Drogon dodged that second spear like a champ.

The Game of Thrones season finale will air on Sunday at 9 p.m. on HBO.