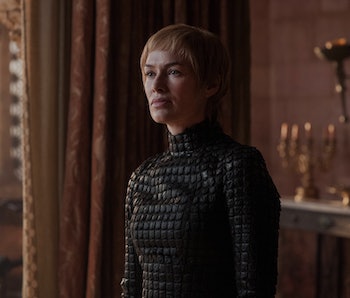 Cersei Lannister may be sitting on the Iron Throne, but she’s haunted by a prophecy she heard as a kid that foretold the deaths of all her children — and, in the books, her own demise as well. But, what if that ominous final part of the theory isn’t actually predicting Cersei’s death?

The Valonqar prophecy, as its known, was delivered by the fortune teller Maggy the Frog in Cersei’s youth. Game of Thrones just adapted part of the scene, where Maggy said all Cersei’s children would die under golden shrouds, but in the Song of Ice and Fire Books she continued:

And when your tears have drowned you, the valonqar shall wrap his hands about your pale white throat and choke the life from you.

“Valonqar” means “little brother” in High Valyrian, which might explain why Cersei hates Tyrion so much. However, the leading theory among fans is that it’s actually Jaime, the younger twin by a couple minutes, that Cersei should fear, and indeed we’re seeing signs that he’s turning against her.

But, as Redditor thndrfngrs noted, the wording of the phropcey leaves open the possibility that it’s not her life. It’s her unborn child.

In “Eastwatch,” Cersei revealed that she is pregnant again with Jaime’s child. This hasn’t happened in the books yet, if it’s ever going to, so there’s no book-reader information to go of off. But, since the first part of the prophecy suggests there’s no way that Cersei’s unborn child is actually going to survive to be born, it’s possibe that Jaime (or some other Valonqar) could cause her to lose the baby during an assault.

Cersei’s only redeeming quality is her love for her children. If someone close to her takes yet another one from her, it might be a fate worse than death.

Game of Thrones Season 7 continues on sunday nights at 9 p.m. Eastern on HBO.

More like this
Entertainment
7.1.2022 10:30 AM
Wild 'Obi-Wan Kenobi' theory sets up 'Mandalorian' Season 3 villain — or hero
By Ryan Britt
Entertainment
6.21.2022 1:00 AM
Game of Thrones sequel could ruin the best part of the series finale
By Alex Welch
Entertainment
6.29.2022 4:50 PM
Guardians of the Galaxy vol. 3 leak reveals one MCU hero's happy ending
By Alex Welch
Share: