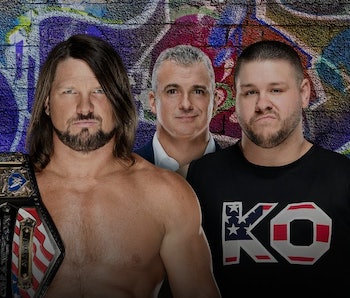 The biggest party of the summer is this Sunday in Brooklyn’s Barclays Center, as WWE presents the 30th edition of SummerSlam. Second only to WrestleMania when it comes to wrestling shows, SummerSlam figures to have plenty of big matches and shocking moments, and the fact everything is pre-determined doesn’t mean the show is any easier to predict.

Unless, that is, you have a hive-mind at your disposal. That’s why Inverse partnered with Unanimous A.I. to enlist a swarm of more than 30 of our wrestling-loving readers to predict the result of the SummerSlam title match between Mahal and challenger Shinsuke Nakamura. As you can see in the animation below, each participant controlled a little golden magnet and used it to drag the puck toward the answer they thought was the most likely outcome. Also, the closer a user puts the magnet to the puck, the greater the pulling force. This is where the hive-mind comes in: As the user sees the puck move toward an outcome, it triggers a psychological response. The user starts to readjust their decision-making, building toward a consensus.

We asked our swarm six questions about SummerSlam. Let’s take a look at the results, starting with the two big title matches for the WWE Championship and the Universal Championship, which are detailed more in separate posts.

Who will win the WWE Universal Championship?

The swarm thinks Brock Lesnar will retain the Universal Championship, which given his absurd dominance is hard to argue with too much. But now take a look at how the hive-mind predicts UFC light heavyweight champion and potential future Lesnar opponent Jon Jones will figure into the action.

How will Jon Jones be involved in SummerSlam?

Our swarm has a flair for the dramatic, if nothing else. Let’s take a look at a situation that is plenty complicated in its own right, the ever-shifting WWE Championship picture.

Who will the WWE championship?

Viewers of this Tuesday’s episode of SmackDown Live will know that three of those options are now off the table, as Baron Corbin spectacularly failed to cash in his Money in the Bank contract. The swarm didn’t know that when it made its pick on Monday, which makes the fact it didn’t predict a cash-in all the more impressive.

What will happen in the U.S. title match?

Let’s move onto the next biggest match on the SummerSlam card, the United States Championship match between A.J. Styles and Kevin Owens, with SmackDown Live commissioner Shane McMahon serving as special guest referee. The storytelling going into this match has focused on the simmering tensions between Styles and McMahon, who had a brutal feud leading up to this year’s WrestleMania, even though Styles has since shifted from villain to good guy. The resolutely mean Kevin Owens has been playing that up alongside McMahon’s long history of biased officiating to suggest Shane could screw Styles over in the big fight, and the swarm agrees with Owens. They see a screwjob coming, possibly with Shane breaking bad in the process.

Who has been attacking the Fashion Police?

The biggest ongoing mystery in WWE has been who is responsible for attacking Tyler Breeze and Fandango, SmackDown’s resident Fashion Police. The two haven’t wrestled on TV in months, instead appearing in weekly, increasingly viral parodies of Law & Order, Miami Vice, Walker: Texas Ranger, The X-Files, and most recently Twin Peaks. After months of investigations and with seemingly every possible culprit eliminated — opening up the possibility that the guilty party could come from one of WWE’s other shows, Monday Night Raw or NXT — there’s no clear sign of resolution to this mystery, especially with this Tuesday’s SmackDown Live suggesting this story will continue past SummerSlam. Given a whole choice of candidates, our swarm ignored all of them, saying it’s “someone else.” One can only guess what percentage of the swarm took that to mean “we have no earthly idea, and we’re not sure WWE has either.”

What will be the best match at SummerSlam?

And finally, a nice, simple question: What will be the best match at SummerSlam? Beyond the three big title fights, two other contenders are the SmackDown tag team championship match between the New Day and the Usos, all of whom have been doing career-best work over the past couple months. The cruiserweight championship match between Neville and Akira Tozawa doesn’t get as much focus in WWE programming as some of the other rivalries, but those are two of the company’s best in-ring performers, and the fact Tozawa won the title on this week’s Monday Night Raw should add extra fire to their rematch. For all that, the swarm’s choice was clear: A.J. Styles and Kevin Owens are going to have match of the night. Considering Styles is the consensus best wrestler in WWE, if not the world, and Owens is no slouch, that feels like a safe bet.