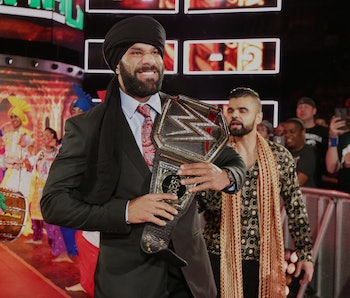 Sure, professional wrestling is pre-determined. (Or fake, if you’re feeling extra persnickety about it.) In theory, the big advantage wrestling has over other, more improvised sports is that it’s possible for WWE to plot out stories over weeks, even months, booking match results and rivalries so they gradually build toward a conclusion that’s organic-feeling and satisfying.

That’s what made the end of Tuesday’s episode of SmackDown Live, the final show before WWE’s massive SummerSlam event on Sunday, so mind-meltingly shocking. The dastardly Baron Corbin held the “Money in the Bank” contract, which he could cash in for a shot at the WWE Championship whenever he wanted. History says the contract holder is almost guaranteed to win the title, but Corbin played himself by cashing in on champ Jinder Mahal at an inopportune time. Distracted by rival John Cena, Corbin got beat by Mahal in seconds. In an instant, Corbin’s title shot — and the months of storytelling that could come with it — evaporated.

And Inverse’s hive-mind might just have seen it all coming. On Monday, we partnered with Unanimous A.I. to enlist a swarm of more than 30 of our wrestling fans/readers to predict the result of the SummerSlam title match between Mahal and challenger Shinsuke Nakamura. As you can see in the animation below, each participant controlled a little golden magnet and used it to drag the puck toward the answer they thought was the most likely outcome. Also, the closer a user puts the magnet to the puck, the greater the pulling force. This is where the hive-mind comes in: As the user sees the puck move toward an outcome, it triggers a psychological response. The user starts to readjust their decision-making, building toward a consensus.

The swarm made its picks on Monday, meaning Corbin’s failed cash-in hadn’t yet happened. That meant there were still a bunch more possible options on the table for SummerSlam, with plenty predicting Corbin would use Money in the Bank to steal the title from Nakamura, with whom he has been feuding for the past couple months. But that’s not where the swarm went.

The vast majority of the hive-mind ignored the various cash-in options and pulled the puck straight toward a different kind of screwy finish: Nakamura wins by disqualification or count-out, which according to WWE rules means Mahal would retain the title. That finish suddenly looks like the best bet: Mahal fending off Corbin on Tuesday implies WWE is not yet done with him as champion, yet Nakamura has been built too strongly — including a rare victory on SmackDown over company legend John Cena — for him to take a straight-up loss.

The hive-mind isn’t right just yet, of course: It’s still entirely possible either Mahal or Nakamura will win outright Sunday. But the swarm correctly dodged any of the Corbin-related options, despite a cash-in seeming by far the likeliest outcome based on WWE storytelling heading into SmackDown. Maybe the wisdom of crowds really is onto something here.

More like this
Innovation
Jan. 19, 2023
A robot choreographer reveals why M3GAN — and all robots — should dance
By Molly Glick
Gear
15 hours ago
Why Mercedes-Benz’s Self-Driving Milestone is a Big Deal for Autonomous Cars
By Jackson Chen
Entertainment
14 hours ago
Robert Zemeckis Has Found His Latest Tech Tool With AI De-Aging — And That’s Good
By Dais Johnston
LEARN SOMETHING NEW EVERY DAY.
Related Tags
Share: