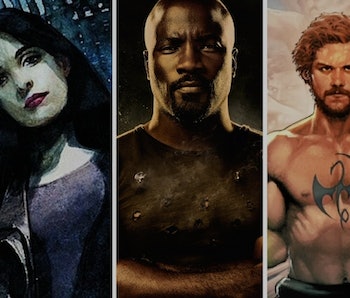 Critics who have seen the first four episodes of Netflix’s big Marvel team-up series, The Defenders, have generally been positive but most note that the show has a slow start. What they mean by this is that it takes a while for Daredevil, Jessica Jones, Luke Cage, and Iron Fist to actually get the gang together, but there’s a more on-the-nose place for this criticism. The introductory credits at the start of every episode are so incredibly boring and slow.

To be fair, The Defenders is nothing new in this regard. Daredevil, Jessica Jones, and the like all were somewhat infamous for their moody, atmospheric opening titles that dragged on for too long. But The Defenders’s intro, which lasts a full minute and ten seconds, is arguably the least interesting visually. Instead of purple-noir paintings like Jessica Jones or bleeding cityscapes like Daredevil, The Defenders offers up high-up views of the Manhattan street grid at night, with color-coordinated overlays of what looks like official promotional art of the four heroes.

It would be easier if you could just skip 1:10 at the start of each episode of The Defenders, but the episodes all kick off with a cold open, which keeps things exciting until the introductory credits grind everything to a halt.

Clearly, there are bigger problems in the world, and it’s not like we should be angry at Netflix for making us see the names of the people who made the content we’re about to enjoy. But, it’s puzzling that the credits are so long. Orange Is the New Black, another Netflix show, also comes under fire for its intro is similarly 1:10 long but feels like an epoch has gone by. Netflix thrives on the binge-viewing model, and throwing these lengthy snores at the start of each hour gets old and unnecessary almost immediately.

Long introductory credits can be good, when they’re engaging or adding something to the show Game of Thrones, for instance, uses a map and killer theme to great effect as it prepares viewers for what’s about to come. The Defenders’s elevator-music theme and Manhattan traffic map doesn’t feel like it serves any purpose other than to take up space.

The Defenders* hits Netflix on August 18.