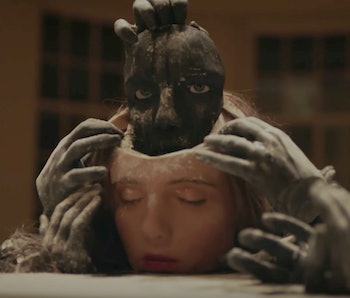 Haunted house stories are a staple of the horror genre, but it shouldn’t be that surprising that the internet found a way to make a tired trope new. Syfy just shared the trailer for Channel Zero: No-End House, the sophomore season of the anthology horror show based on online scary stories known as creepypasta. No-End House, which is based on creepypasta of the same name, is a cerebral spin on a haunted house, one that people touring might not ever be able to escape from.

As in Brian Russell’s creepypasta that inspired the show, No-End House focuses on a house consisting of a series of increasingly spooky rooms that visitors can attempt to brave. It seems all fun and games at first, but the rooms quickly become truly upsetting. They’re different than they are in the story, but the trailer gives us a glimpse of the first five rooms.

The twist, though, is the sixth room. When the main character, Margot Sleator (Amy Forsyth of Hulu’s The Path) leaves the No-End House, it’s unclear if that’s what actually happened. Even though she’s walking around the “real world,” things seem off. Is she still trapped in an elaborate, brain-melting sixth room?

We’ll find out when Channel Zero: No-End House premieres on Syfy on September 20.