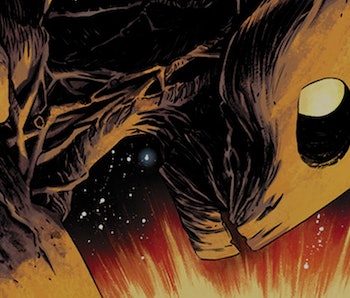 Coming off the successful Guardians of the Galaxy and other Marvel Studio movies, Marvel — or rather, parent company Disney — have put super weirdos like Groot front and center ahead of guys like Wolverine.

This week will be the release of Groot #1, the first issue in a new comic book series starring Marvel’s Chia Pet. If the brand, spanking new title lives up to how thespian Vin Diesel and a hefty amount of CGI portrayed him, it’s bound to become a fan-favorite title for Marvel readers.

But what about its better known characters like the X-Men and Fantastic Four? What happened to their titles? Cancelled. Merchandise? Removed. The wildly-successful Disney Infinity games? Left out.

The movie ownership of these characters to Disney’s box office competitors like 20th Century Fox have blacklisted icons like the X-Men out of Marvel-centric products. A quick look at the official Marvel Studios website and there is no mention of the upcoming The Fantastic Four. And why would they when Ant-Man is coming out soon?

But is Marvel shooting themselves in the foot? According to UPROXX, Fox wouldn’t see a dime on any comics-specific merchandise featuring these characters, Marvel would. Marvel also reaps more money from Spider-Man merchandise than anyone in the entire comics industry makes selling books, despite that Spidey’s movie rights were exclusively Sony’s until this year. Is Groot getting his own series really letting Marvel swim in money like Scrooge McDuck?

Despite being marketing juggernauts, Marvel and by extension Disney haven’t demonstrated the sharpest intelligence in regards to selling to their own audience. In this case, Marvel looks less like a clever property business and more like an angry parent whose runaway kid isn't coming back home.