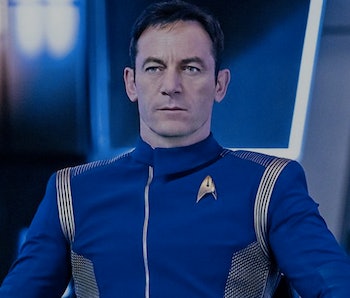 The captain and first officer dynamic is central to the latest trailer for Star Trek: Discovery. And it looks like Captain Lorca and Commander Burnham are going to be just as important of a team as Bunrham and Captain Georgiou. But does all of this suggest that Michelle Yeoh’s Georgiou might not make it out of the first episode? Or is it the reverse? Could Captain Lorca perhaps die early on? To put it another way: it’s not clear how Discovery will work with two starship captains in its regular cast.

On Thursday, the official Star Trek: Discovery Twitter account revealed a new-one minute teaser for the show. Though a lot of the footage was similar to the trailer released at Comic-Con, there was a bunch of new stuff, mostly brand new dialogue from Captain Lorca.

Reminding a lot of hardcore Trekkies of Star Trek: Voyager, Captain Lorca says “we’re a long way from home” in this new trailer. In Voyager they were stranded in the Delta Quadrant, which put them like 70 years away from Federation space. While it’s possible that Discovery is similarly far-flung, it seems unlikely since the first trailer had Sarek talking about “the edge of Federation space.” So, being far way from home, in space, is relative.

The trailer also plays up what seems like Burnham’s animosity toward the Klingons, which we now know is the result of her parent’s having been killed by a Klingon attack when she was a child. Striding down the corridor of the Discovery, reminding fans of Kirk and Spock or Picard and Riker, Lorca asks Burnham, “You know what we need to do?” To which Burnham says strongly “we need to win.”

Though Captain Georgiou also appears in the trailer, the fact that the team-up between Lorca and Burnham is so central begs the question: will Michelle Yeoh’s heroic Starfleet Captain make it out of the pilot episode at all?

*See also: [Everything We Know about Star Trek: Discovery*](https://www.inverse.com/article/27032-star-trek-discovery-everything-we-know-timeline-canon-bryan-fuller-klingons)