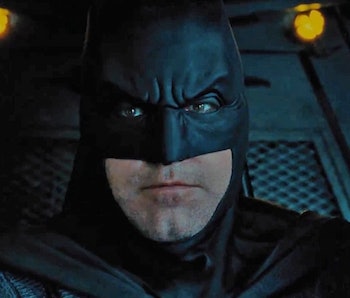 Time to put away your bat-shaped cattle brands and Bat rifles, because actor Ben Affleck has assured fans that Justice League’s version of Batman will return to the character’s more traditional, heroic roots.

The news comes from Affleck’s interview with Entertainment Weekly on Tuesday, in which the actor explained the shifting tone of the DCEU’s Batman.

“BvS departed a little bit from the traditional Batman,” Affleck admitted. “He started out with all this rage directed at Superman, because of his coworkers who had died in the fight Superman had with Zod.” That Batman “was holding on to a lot of anger, in a little bit of an irrational way.” Full of unbridled rage, Batman branded criminals left and right, and didn’t really mind killing people, Superman included. But things change in Justice League.

“This is a much more traditional Batman,” Affleck reassures. “He’s heroic. He does things in his own way, but he wants to save people, help people.” Part of doing that has to do with assembling a kick-ass squad of superheroes.

This shifting tone is intertwined with the more positive, team-up nature of Justice League. Affleck calls it “a story about multilateralism,” which is a fancy way of saying “co-operative team-up of three or more entities.”

Batman and Wonder Woman lead the efforts to unite a team for the greater good, so we’re getting a more positive, proactive Batman. Affleck said, “He’s put in this position of having to reach out, find other people, convincing them to do something.” But the squad might not gel immediately.

“Part of the drama of the movie is the question of whether or not the team is going to come together,” Affleck says. “It’s very different from the tenor of the last movie.” Obviously, the Justice League will come together by the end, but if the negative reactions to Batman v Superman are any indication, perhaps a more positive tone is the way to go.