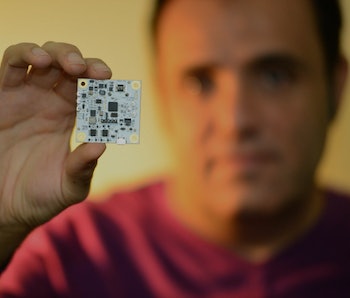 The year is 2022. You sit down at your office desk, back from Ikea with your new lamp. You take it out of the box, place it on the table, and it illuminates the workspace immediately. You then take your MacBook out of your backpack, place it to the right of the lamp, and it starts charging instantly.

It sounds unreasonable to think that all this could become reality in just a few years. But behind closed doors, this technology already exists.

“A couple of months ago, we demonstrated an entire table top where everything on it was powered wirelessly,” Alex Lidow, CEO of EPC, tells Inverse. “A lamp, computer monitor, computer, cell phones being charged… all sorts of stuff.”

The race to cut the power cord is on. In one corner, there’s Lidow and others, who want to create whole pieces of furniture that can power devices over a short range through magnetic resonance. In the other corner, there’s companies like Ossia and Energous, which believe the future of power is something that works closer to Wi-Fi.

“I think it would be safe to say that we’ll see products next year, in 2018,” Hatem Zeine, founder of Ossia, tells Inverse. “I would say that this is the shortest time I have ever seen in knowing when we will see products on the market.”

This didn’t spring up overnight. Ossia has been working on its technology for over six years, three of those with public demonstrations. In December, it released the reference design kits for Cota wireless receivers. These allow device makers to build a fully-functional wireless power system. Similarly, the standards behind EPC’s system were approved three years ago.

It’s impressive, but at the time of writing it’s not on the market. The form of “wireless charging” consumers are most likely to see are the ones found in Android smartphones. The Powermat and Qi wireless standards, like the ones found in the Samsung Galaxy S8, use inductive charging. When the user places the device on a special pad, the phone starts charging. It’s wireless in the sense that the user doesn’t plug a wire into it, but as soon as it loses contact with the pad, it stops charging. This is the solution Apple is rumored to include with this year’s iPhone 8.

“Magnetic resonance,” favored by EPC, is a murky term. Experts argue that it confuses things more than anything else, but as it’s used in marketing it’s important to understand. Both systems transmit power by using a coil that generates electromagnetic fields, which is then picked up by a second coil in the receiver device. “Resonance” charging involves tuning those coils to the same frequency to improve the efficiency, a bit like a radio.

Systems like EPC’s transmit power in the range of a few megahertz (MHz), which means they’re good for charging a few centimeters away from the receiver at most. Ossia, on the other hand, uses an electromagnetic frequency wave similar to Wi-fi, at 2.4GHz. This offers the ability to better focus the energy and charge devices from a few meters away.

Zeine says that in its demonstrations, it has proven that it can safely charge a device the size of an iPhone with one watt of energy while it’s touching human skin, which he refers to as an “extreme case.” By comparison, a typical phone wall charger supplies around five watts. During a demonstration of a consumer base station, Ossia told Inverse that the charger would likely retail for around $200. The company has had “meaningful” discussions with the FCC, and Zeine says that its ability to charge devices over a system like Wi-Fi offers a range of opportunities.

“We envision that the Cota technology will be covering all spaces,” Zeine says. “When your phone is charging at home, in the car, in the office, in the train, in the coffee shop, airport gate, airplane…you will not need to ever think about charging. In fact, your phone will have a much smaller battery because you’re constantly using the power available.”

Lidow’s team, on the other hand, has demonstrated receivers for 25-watt lamps and flat-screen TVs. The team gutted the AC power cords, replaced it with their wireless receivers, and powered it on by placing it on the display table.

“These power areas can roll out like wallpaper. It’s a very inexpensive type of antenna,” Lidow says. “The vision is that we have a world that does not have power cords.”

While both companies offer conflicting approaches, one thing is clear: the day is coming where we cut the power cord and all our devices become truly wireless.

More like this
Innovation
5.8.2022 12:30 PM
How the new Large Hadron Collider experiments could change physics forever
By Sarah Wells
Innovation
5.13.2022 11:00 AM
These robots have one special skill that could make human chefs obsolete
By Sascha Brodsky
Innovation
5.12.2022 2:00 PM
Why one electric truck could tip America to renounce gas-powered cars for good
By Claire Cameron
Share: