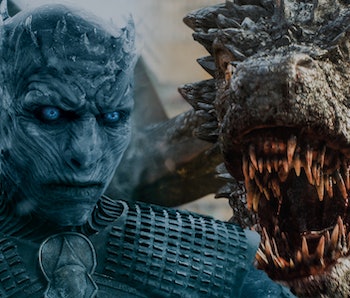 There are only two things that we know for sure can kill White Walkers: Valyrian steel and Dragonglass. Both substances are in pretty short supply, and they’re only useful in the hands of a skilled warrior. Luckily, there’s something else that we presume could take down the army of the undead.

With three dragons, it seems like Daenerys should be able to fly north of the Wall, do a couple passes of the Night King’s army, and incinerate them all without breaking a sweat. However, Game of Thrones has already shown us how the undead might be able to fight back against dragons in a seemingly inevitable battle. We just need to put all the pieces together.

The fourth episode of Season 7, “The Spoils of War,” showed us just how devastating dragons can be in battle. Normal arrows just bounced off Drogon’s chest as he effortlessly turned Lannister soldiers to ash. However, that same episode also showed that a giant, super-strong scorpion can wound a dragon. Bronn was able to use Qyburn’s invention to bring Drogon out of the sky, and though the dragon survived, it showed a method that could, potentially, combat Dany’s nigh-unstoppable children.

Now, the Night King doesn’t have a Qyburn. There aren’t craftsmen in the Land of Always Winter building fancy crossbows. You know what the Night King does have at his disposal, though? Zombie giants. We know this because, in the Season premiere, Game of Thrones went out of its way to let audiences know that Wun Wun’s brethren (though probably not Wun Wun himself) are part of the undead army.

Zombie giants could be bad news for dragons, based on what we saw happen during the Battle of Castle Black in the fourth season’s penultimate episode, “Watchers on the Wall.” A normal giant fired off a huge arrow from his massive bow and sent a poor brother of the Night’s Watch flying into the air and over the Wall.

Compare what the giant’s arrow did to a human…

To what Qyburn’s scorpion did to a human…

If anything, the giant’s bow and arrow looks even more powerful than the best Qyburn could come up with. If the Night King’s army has even a handful of zombie giants, and all of them train their bows on one of Dany’s dragons, it wouldn’t be shocking if they brought one down.

And, if the Night King can kill a dragon, well, that probably means he can raise one.

Game of Thrones Season 7 continues on Sunday at 9 p.m. Eastern on HBO.