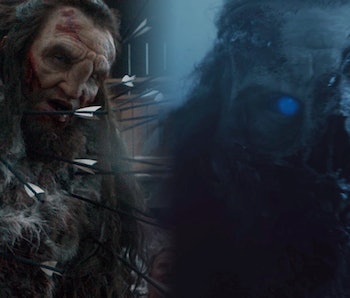 Fans of HBO’s Game of Thrones were overjoyed on Sunday night to see all their favorite characters return to TV during the Season 7 premiere. Jon, Dany, Tyrion, Arya, and the rest are finally all back, but we also saw one dead character who we never thought we’d see again. Maybe.

This post contains spoilers for the season premiere of Game of Thrones, but you probably already knew that.

Bran didn’t do much in the episode aside from finally making his way south of the Wall again, but before we actually got a look at the new Three-Eyed Raven, we saw one of his visions. The scene consisted of an ominously approaching storm full of the Night King’s army of the dead. It’s massive, and we see that some of the wights are undead giants — including the one the camera focuses on, who only has one glowing blue eye.

Know who else had one eye when he was killed? Wun Wun, Jon and Tormund’s buddy who took an arrow to the brain courtesy of Ramsay Bolton at the Battle of the Bastards. The way that the camera lingered on the undead giant’s empty socket made fans wonder if somehow Wun Wun had joined the army of the dead, and it’s hard to prove if it was or wasn’t the big guy.

The Case for It Being Wun Wun

Yes, it looked like Wun Wun, and it was missing the same eye, but there’s a little more to it. Wun Wun died in Winterfell, which is obviously south of the Wall. The Night King and his undead army are currently north of it, but that doesn’t mean anything to Bran. As his vision of Cersei’s wildfire explosion last season proved, he can see the future as well as the past. Some viewers think that it looks like the army is trampling over grass, which would mean they’d have to be south of the Wall. If the White Walkers made it past the giant ice barrier, they’d no doubt continue to amass undead warriors as they marched south. A somewhat recently deceased giant would be quite the recruit.

In its later seasons, Game of Thrones has also grown fonder of bringing back old characters instead of introducing new ones, making tidy, loop-closing decisions going into the conclusion. Bringing back Wun Wun in some capacity wouldn’t be out of the ordinary for Thrones.

The Case Against It Being Wun Wun

Personally, I don’t buy it. It’s not so hard to believe that there are other dead, rotting, and possibly one-eyed giants out there that the Night King could’ve picked up. In order for it to be Wun Wun, Jon Snow would’ve needed to screw up.

After Wun Wun — one of Jon’s essential allies — died during the Battle of the Bastards, what did Jon do with him? At the Wall, Jon insisted they burn all the dead bodies, lest they come back to life as wights. Maybe Winterfell is far enough south that he’s not concerned about that. Still, though, he would do something with all the dead. Digging a mass grave would be a lot of work — heck, digging a grave just for Wun Wun would be a lot of work. Chances are Jon had the dead burned, anyway.

Because, if he didn’t, that means that Wun Wun and the rest of the dead were just slowly decomposing in a pile out in the open somewhere around Winterfell. Sure, the dead probably sat out in the cold for a while after the battle ended, but for Wun Wun to join the army of the dead would mean his arrow-ridden corpse would’ve had to just be sitting there for a long, long time.

It seems out of character for Jon, who cares about his allies and wants to arm women to fight White Walkers, to disrespect the dead and potentially arm the Night King by not disposing of Wun Wun’s corpse.

Game of Thrones Season 7 is currently airing on Sundays at 9 p.m. Eastern on HBO.