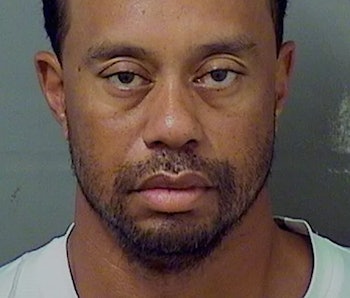 On May 29, police found Tiger Woods asleep at the wheel on a Florida road and arrested him on suspicion of driving under the influence. Now, two months later, the public has received the toxicology report from his arrest. The Palm Beach County Sheriff’s Office released the report on Monday, and it’s even worse than we’d thought.

His public arrest report and affidavit from May indicated that he’d been taking three prescription drugs, two of which were not FDA-approved: Soloxine, Vicodin, and either Etorix or Turox. Soloxine treats hypothyroidism, a thyroid condition, Vicodin is a highly addictive symi-synthic opioid painkiller, and both Etorix and Turox treat joint pain.

Curiously, only one of these drugs — Vicodin, which is also the only one approved for use in the United States — has the potential for side effects that are anything like what Tiger Woods experienced (drowsiness, confusion, and sluggishness). It seemed that there might be more to Woods’ imbibement than was disclosed in these documents.

This drug treats anxiety, and it’s FDA-approved. Side effects can include drowsiness, fatigue, and forgetfulness.

This treats insomnia; certain versions and dosages of it are FDA-approved. An FDA warning about zolpidem reads, “all drugs taken for insomnia can impair driving and activities that require alertness the morning after use.”

These are both highly addictive opioid pain medications. They’re among the most commonly abused prescription opiates and play a big part in the opioid epidemic. Certain hydromorphone and hydrocodone products are FDA-approved. The FDA warns that hydromorphone “may impair motor skills or judgments, making it unsafe to operate machinery, drive, or engage in other potentially dangerous activities.”

THC is the ingredient in marijuana that gets you high. Now, Woods only had metabolites (the remnants of a drug that remain after use) in his system. THC can register on a drug test for a long time — between two hours and two months — after it’s taken.

So, what are the implications of this? First of all, it now seems that Woods could have been breaking the law for the drugs he took, in addition to driving under the influence. Non-FDA approved drugs aren’t illegal to imbibe, but the THC metabolites could be an issue for Woods. Medicinal marijuana became legal in Florida in January, but it seems unlikely that Woods had a prescription since it wasn’t on his initial arrest report, which listed his other prescriptions.

Then there’s the fact that this drug cocktail is a recipe for disaster. There’s no way he should’ve been driving after ingesting those — every single one has side effects that could’ve contributed to his drowsiness, and he took them all together.

In fact, the U.S. National Library of Medicine says that combining either hydrocodone or hydromorphone with alprazolam could cause extreme sleepiness, lightheadedness, dizziness, difficult breathing, or unresponsiveness. Hydrocodone and alprazolam together could even cause “breathing problems, sedation, coma, or other serious, life-threatening side effects.”

“Recently, I had been trying on my own to treat my back pain and a sleep disorder, including insomnia,” Woods said in a statement on Monday, “but I realize now it was a mistake to do this without medical assistance. I am continuing to work with my doctors, and they feel I’ve made significant progress. I remain grateful for the amazing support that I continue to receive and for the family and friends that are assisting me.”

More like this
Science
5.18.2022 8:00 PM
Pollution is responsible for one in six deaths each year — and it’s getting worse
By Tara Yarlagadda
Mind and Body
5.7.2022 12:00 PM
Barbell exercises might not work for everyone – here’s what to do instead
By David Rogerson and The Conversation
Science
20 hours ago
These galaxies have no dark matter — and astronomers may finally know why
By Charles Q. Choi
Related Tags
Share: