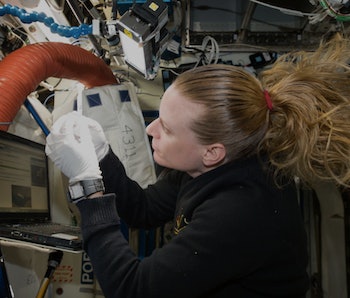 On Monday, NASA and SpaceX are launching a Dragon spacecraft carrying a whole lot of stuff up to the ISS. It will be SpaceX and NASA’s 12th commercial resupply services mission — dubbed CRS-12.

Although it’s the twelfth round of these kinds of missions, this Dragon will be breaking new ground by carrying a huge load of over 6,400 pounds of research, crew supplies, and hardware up to the ISS. Within that bounty, the CRS-12 will ferry some really interesting equipment that will be used to facilitate some next-level experiments.

Here are the experiments that will come out of what’s aboard the CRS-12 mission:

This is a big one for the upcoming mission. Spearheaded by the Michael J. Fox Foundation, researchers will be taking advantage of the orbiting laboratory’s microgravity environment to grow larger versions of an important protein in Parkinson’s research. Called LRRK2, it’s known to be the greatest genetic contributor to Parkinson’s disease.

Protein crystals can attain a larger size — as well as a more perfect structure — if they’re grown in microgravity as opposed to on Earth, because gravity is known to interfere with protein formation. Since LRRK2’s exact structure is still not entirely understood, researchers hope to gain insight by growing larger versions of it in the ISS’s lab. The Michael J. Fox foundation believes such insights could provide the information needed to develop therapies to fight Parkinson’s disease.

Sponsored by the National Laboratory, the Dragon will deliver a microsatellite that carries an optical imaging system, including a commercial, off-the-shelf telescope. The goal of this operation — once it reaches the ISS — will be to demonstrate that small satellites can assist in critical operations in low-Earth orbit, like capturing lower-cost imagery of Earth during severe weather, or detecting natural disasters.

Once again, the ISS’s microgravity conditions will be used to science’s advantages, this time to bioengineer the growth of lung tissue. Scientists will observe how gravity affects the growth and specialization of cells. The goal of these experiments is also to produce bioengineered lung tissue that can be used to explore and understand physiology, disease pathology, and lung development.

An Instrument to Study Cosmic Rays

Pronounced “ice cream,” the ISS Cosmic Ray Energetics and Mass instrument will be brought by the Dragon to attach externally to the ISS. It’s a balloon-borne instrument that will sit on the Japanese exposed module platform aboard the ISS for three years, gathering data on the charges of cosmic rays, the powerful bursts of high-energy radiation we still don’t entirely understand.