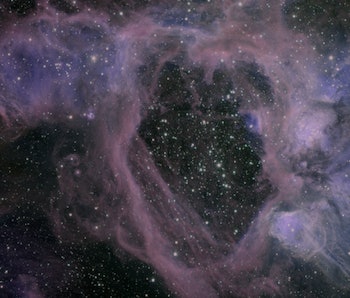 Cosmic rays are the invisible ether that fills up outer space, but there’s a lot we don’t know: We’ve never been quite sure from exactly where these powerful bursts of high-energy radiation come from, or how they’re produced.

But now we have a few big clues that will change the way we think about cosmic rays: A new study conducted by a team of researchers from NASA and Washington University in St. Louis and published in the journal Science think cosmic rays that arrive at Earth are primarily emanating from nearby clusters of massive stars.

Using the Cosmic Ray Isotope Spectrometer (CRIS) aboard NASA’s Advanced Composition Explorer spacecraft, the researchers observed a rare time of cosmic ray — a radioactive isotope of iron with a half-life of 2.6 million years — that’s able to survive the large distance between the rays’ origin and Earth. During CRIS’ 17 years in space, it has only detected 15 of these types of cosmic rays.

After analyzing the data, the researchers deduced that there was a supernova explosion in our region of the galaxy at some point within the last few million years. The remnants of that supernova — which is a violent explosion that demarcates the end of a star’s life — still rain cosmic rays down on Earth even to this day.

Furthermore, “the new data also show the source of galactic cosmic rays is nearby clusters of massive stars, where supernova explosions occur every few million years,” said Martin Israel, a physicist at Washington University and a co-author on the paper, in a news release. The researchers believe that they might be able to identify other sources of cosmic rays by focusing investigations on clusters of massive stars known as OB associations — of which there are 20 in close proximity to Earth.

But we don’t have to just concentrate on outer space in order to learn more about cosmic rays. The research team believes the supernova behind the most recent iron-isotope cosmic ray discovery may have also left traces of energy in the Earth’s oceans and even on the moon in the form of excess radioactive iron. That prediction is based off a pair of recent studies published in Nature that found iron-isotope depositions in other parts of the world and hypothesized that they could be the result of cosmic rays flung off from another series of supernovas.

In fact, samples of moon rock derived from the Apollo missions were found to have elevated levels of radioactive iron, too.

“Our observation…lends support to the emerging model of cosmic-ray origin in OB associations,” Israel said.