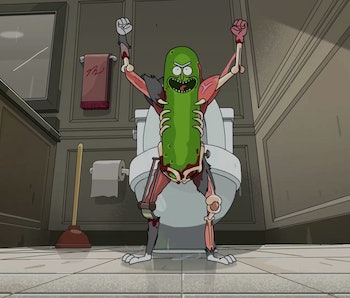 With its mix of rat guts, exposed bones, and garbage, Rick and Morty’s Pickle Rick design is already a little out there. But it could have easily been much crazier.

On August 5, Adult Swim uploaded some unused designs from the Rick and Morty that showed off some Pickle Ricks that could have been. “At the beginning, we were just throwing any idea out there,” Maximus Pauson, a character designer on the series, says in the YouTube video. And it shows. There’s a Pickle Rick with a rat-butt on his crotch, one that looks like a BioShock Big Daddy, and another that seems to be a cross between a centaur, a rat, and a claw machine.

“Ultimately, we landed on something that emphasized the pickle-ness,” Paulson adds.

In “Pickle Rick,” Rick turns himself into a pickle to get out of attending family therapy. But, the kids call his bluff, and an in-denial Beth unknowingly takes away Rick’s only method of transforming himself back into a human. This leads to a bloody adventure in the sewers and a foreign government building that shocked fans of the series with just how gory it was.

Rick and Morty character designer Justin Noel shared some of the designs over Twitter, some of which can also be seen in the video:

The designers also detail how they decided on the look of the rats, which Pickle Rick mows through with such ease in the episode. “Nobody wants to see a bunch of cute rats dying, so we were like ‘alright, let’s make it gnarly, let’s just like mess them up really hard,” says character designer Kendra Melton. “We arched the back a lot more, put some boils on ‘em, got rid of some fur.”

“And that was necessary, because otherwise you’re watching a pickle murder innocent rats for a minute,” says art director Jeffrey Thompson. Imagine how much worse that would’ve been if the rat-slaughter scene which was twice as long, as originally planned.

Unsurprisingly, a lot of work goes into making sure viewers enjoy watching a Terminator pickle tear through a swarm of rats.

The sneak peak at Pickle Rick is below:

Rick and Morty airs on Sunday at 11:30 p.m. Eastern on Cartoon Network.