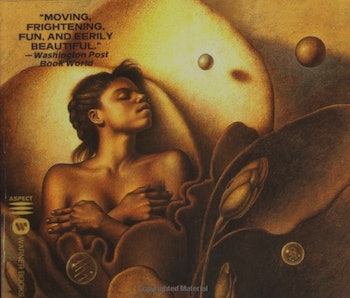 Octavia Butler was a science fiction legend, best known for her novels Kindred and Parable of the Sower. Even so, her works have yet to be adapted for the screen — until now. Deadline announced on Wednesday that Ava DuVernay is adapting Butler’s novel Dawn for television.

The first in a trilogy alternately called Lilith’s Brood and the Xenogenesis trilogy, Dawn centers around an African American protagonist who is one of just a few humans who have survived a nuclear apocalypse. Luckily, they’re saved by aliens. The catch? The aliens want to, uh, genetically merge with them. The trilogy addresses themes of colonization and race against an epic sci-fi backdrop.

DuVernay is working with Misfits writer Victoria Mahoney and producer Charles D. King’s Macro Ventures to bring the 1987 novel to the small screen.

Dawn was followed by Adulthood Rites in 1988 and Imago in 1989. There is no word yet on whether the other two novels will be incorporated into the television series.

Although the project doesn’t have a studio attached, with a name like DuVernay attached, chances are low that it won’t move forward.

There is no word yet on a release date.