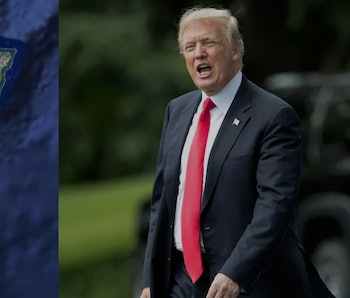 On Tuesday, President Donald Trump distanced himself verbally from what has been his administration’s somewhat measured approach (behind the scenes) to the nuclear threat from the Democratic People’s Republic of Korea, or D.P.R.K., instead opting for hot-blooded rhetoric. Shortly after, North Korea’s state-run media issued a government statement threatening to strike the island of Guam, the westernmost territory controlled by the United States, “in a multi-current and consecutive way any moment.” While both of these events are worrisome, the latter has precedent and the former does not.

D.P.R.K. leader Kim Jong-un has many times threatened to attack Guam, where 160,000 civilians live and thousands of U.S. troops are stationed. Schools on Guam even hold regular shelter-in-place drills to help prepare for a potential North Korean nuclear attack.

Guam’s position in the western Pacific Ocean puts it only slightly more than 2,000 miles from North Korea, so it’s traditionally been a more feasible target for D.P.R.K. missiles than the continental United States. But that may have recently changed: North Korea possibly achieved the capability to strike as far as New York City with its intercontinental ballistic missile test on July 28.

What caused Kim Jong-un to offer up this latest warning about Guam? Earlier in the day on Tuesday, President Trump told reporters that “North Korea best not make any more threats to the United States. They will be met with fire and fury like the world has never seen.” In reference to Kim Jong-un, he added: “He has been very threatening beyond a normal state, and as I said, they will be met with fire and fury and, frankly, power, the likes of which this world has never seen before.”

Commentators are likening President Trump’s words to President Harry Truman’s speech after the United States dropped a bomb on Hiroshima, in which he said that the Japanese could “expect a rain of ruin from the air, the like of which has never been seen on this earth” if they did not surrender.

But in comparison to past presidential rhetoric on North Korea, President Trump’s words have no precedent.

While President Obama made speeches and issued statements that threatened the D.P.R.K., his warnings mostly concerned sanctions. He occasionally affirmed his willingness to take military action against North Korea, but used more careful language.

In 2016, President Obama said, “We could, obviously, destroy North Korea with our arsenals” — similarly to President Trump, this was a comment to a journalist, as opposed to an official statement — but clarified that such an action would not be appropriate because of the “humanitarian costs.” In 2015, during a joint press conference with former South Korean president Park Geun-hye, he said, “Any provocation or aggression will be met by a strong, united response by South Korea and the United States.”

Perhaps the closest President Obama ever came to President Trump’s language was in 2014, when he said to U.S. troops stationed in Seoul, South Korea, “We will not hesitate to use our military might to defend our allies and our way of life.”

President Bill Clinton used slightly harsher language when he said in a 1993 speech that if North Korea ever used nuclear weapons, “it would be the end of their country.”

These past comments from presidents — though severe — are dissimilar to President Trump’s words on Tuesday, which gave the impression of being impulsive. Before he came into office, some foreign policy experts predicted that Trump, like Kim Jong-un himself, might attempt the so-called “madman” approach to international politics: a strategy in which an actor seems irrational to gain the power of unpredictability.

If President Trump is trying to give the D.P.R.K. leader a taste of his own medicine, we can only hope that Kim Jong-un is bluffing.