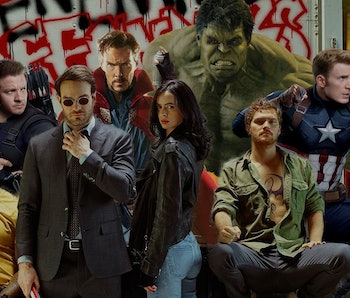 When the street-level heroes of Netflix’s Marvel series band together to form the Defenders later this month, excited comics fans will be thrilled to finally see the classic superhero team depicted on screen. Right? Well, not quite. The foursome of Daredevil, Jessica Jones, Luke Cage, and Iron Fist is an almost totally original grouping of the eponymous team, because even though the Defenders have been around for a while, the comics lineup has historically been very different. While there have been a few regulars, the team has a rotating roster that’s included quite a few superheroes from the Marvel Cinematic Universe.

Chances are we’re not going to be seeing any big-screen MCU heroes pop up in the Defenders anytime soon (or perhaps ever, given the confusing relationship between Marvel’s film and television properties). Not to mention all of the other Marvel heroes, including Wolverine and Deadpool, that certainly won’t appear in the Netflix series because Marvel doesn’t own the characters’ film rights. All that said, here’s a rundown of some of the MCU heroes that have called themselves Defenders at various points in comics history.

The first thing to know about the Defenders is that, unlike the Avengers, they’re not even really a team. Within the pages of the comics themselves, the Defenders are explicitly called a “non-team,” since they’re more of a flexible group of heroes who come together in various acclamations to combat one crisis. Even so, there is one character associated with the team more than any other: Doctor Strange. The Sorcerer Supreme, along with the Hulk (who we’ll get to in a minute) and Namor the Sub-Mariner, formed to OG Defenders in 1971’s Marvel Features #1, though they first unofficially assembled in their solo series before that.

For a while, Doctor Strange was the only consistent member of the Defenders and he’s the closest thing the team ever had to a leader. Chances are Netflix’s Defenders could use his guidance, but alas.

During the Defenders initial romp as a team, Doctor Strange got the haughty anti-hero Namor to help him defend Earth from extra-dimensional, demonic creatures known as the Undying Ones. He then got the Hulk’s help as well, because when it comes to muscle, you really can’t beat the big green guy. The Hulk went on to be a mainstay of the team, though often he’d be replaced by She-Hulk.

Valkyrie, albeit a very different version of the Asgardian warrior we’ll meet in Thor: Ragnarok, made her proper debut within the pages of Defenders. Her backstory is complicated, but in the comics, she was a warrior goddess, but her essence was put inside of a mortal woman, Barbara Norriss. This version of Valkyrie was a tentpole member of the team.

The purple-clad archer Hawkeye fought several battles with the Defenders beginning in the early 1970s, though, true to the flexible nature of the team’s roster, he eventually left.

The Ant-Man MCU fans know from the films, Scott Lang (Paul Rudd) would eventually become a member of the Defenders, but his predecessor Hank Pym was a major member far before Scott ever came on the scene. Hank, who first joined under his Yellowjacket identity and then continued to fight with the team during the time he went by Giant-Man, was an invaluable member.

Ghost Rider may not be in the movies, but as a character in ABC’s Agents of S.H.I.E.L.D., he’s still a character within the MCU. And, Ghost Rider has sped his hog through Defenders comics before, having been recruited by Doctor Strange for a mission in the ‘90s.

Spider-Man, perhaps the most iconic New York City hero, has partied with the Defenders, though he was never a major, noteworthy member.

Captain America is, understandably, more famous for being an Avenger than a Defender. But, in the ‘90s series Secret Defenders, Doctor Strange would recruit various Marvel heroes for specific, one-off missions. Captain America was a Defender for one of these.

So was War Machine. Listen, gang, this is why the Defenders are a “non-team.” Their membership is intentionally flimsy and flexible.

The Guardians of the Galaxy, who until James Gunn’s MCU movie were among the more obscure characters in all of Marvel Comics, were a perfect fit for the Defenders, and the groups shared members of the years. However, much like the Defenders, the Guardians’ membership has changed a lot. Drax the Destroyer, though, was for sure a Guardian who was also a Defender.