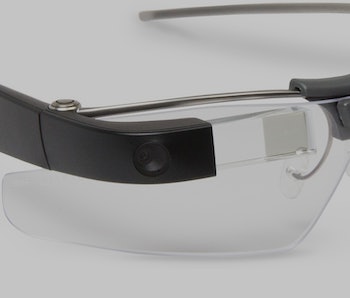 Just about two years after Google spiked the original Glass, the company is back with Glass Enterprise Edition, targeted towards factory employees and blue-collar specialists building machines big and small, using a precise set of instructions pulled up on the inside of the Glass’s smart lens. Google’s resurrection of Glass, with a few new work-specific alternations and improvements, has so far been hailed as a smart pivot for a device with extraordinary potential, but a misguided initial message.

The first Glass was plagued by concerns the device was an unwanted intrusion into other people’s privacy. Users could record potentially record people without their consent, even if a light on the front made it clear the camera was on. The pushback against “Glassholes” smeared whatever big improvements Glass conferred on the user’s life.

But what about the new Glass EE? As a device marketed toward the workplace, has Google successfully freed it from the besmirchment of privacy questions that helped doom the original device?

For Woodrow Hartzog, a digital privacy expert and professor of law and computer science at Northeastern University, the answer to that question is mixed. “The concerns people had about in Google Glass in privacy might be mitigated in a workplace environment,” he tells Inverse, “if only because there are fewer intimate scenarios in which they might be deployed, and because employees generally have more unique expectations of privacy which are sent to their employer, because of the employment agreement they’ve signed.”

“If it’s being deployed in the workplace, you probably have more circumscribed, specific uses,” says Hartzog. “There are probably fewer misconceptions about what to expect.”

He cautions that this doesn’t mean there are no privacy issues around Glass EE, even in the workplace. Questions still remain about how employers might use the data they collect through Glass EE devices on the factory floor, what Glass EE might do to employee morale in terms of autonomy and power employees have in the first place, the potential to turn Glass EE devices into tools for surveillance, whether Google may reverse course with the new model and begin implementing facial recognition technologies on Glass devices — and what that will mean for privacy concerns moving forward — and many others.

“The way I see it,” says Hartzog, “the only thing that really changes in the workplace environment is the unique privacy context separate from existing in the public in general and having the glass ‘out in the wild,’ as it were. I would still ask many of the same questions that I would for any consumer technology being marketed to the public.”

While Glass EE may not experience the full brunt of privacy questions that helped doom the original Glass, the new device’s makeover — and the mostly-positive reception its received so far — does illustrate how tech companies must fine-tune their messaging in order to best convince consumers their products can improve their lives.

One thing has changed, according to Hartzog. “Companies have a more articulate way to describe what the benefits of Glass is,” he says. “That will factor into what people consider in the costs and benefits of Glass, and whether that’s worth the tradeoff [of privacy].” Privacy concerns factor into nearly any sort of digital technology these days — especially something as ubiquitous as a smartphone — and people won’t simply stop using those devices just because of a potential privacy issue.

“Generally, consumers have decided the privacy cost of a smartphone or an app like Facebook is acceptable, given the uses they have,” says Hartzog. “Whether that’s an accurate assessment of costs and risks is up for debate.” It’s not easy for experts, much less ordinary citizens, to evaluate those things on a simple standard.

In other words, the original Google Glass’s failure may have had more to do with the fact that consumers didn’t feel the practical benefits outweighed privacy concerns, rather than with absolute objections over privacy and digital security. Google may have found a solution to that concern with Glass EE, not through a rapid transformation of features that mitigate privacy concerns — Glass EE is more-or-less just a technical improvement of its predecessor — but by simply changing its messaging and promoting Glass as a workplace device.

Employees probably wouldn’t mind if Glass EE intrudes on their privacy at work, because the expectations of privacy are already altered by showing up to work and doing a job. And if the device helps make it easier to fulfill their tasks, they may not really mind.

That digital privacy cost-benefit interplay will become a bigger deal as technology moves forward. Automated cars, for instance, will need to gather incredible amounts of personal data in order to operate safely and efficiently. Hartzog suggests the benefit of a driverless car is so immediate that people will probably acquiesce to that loss in privacy much more readily than they did for Glass.

Still, Glass EE is new, and over the next several months or years, it’s conceivable some employees may raise alarms about what the new device does to privacy, and how acceptable those issues will be to employees and employers alike. Will those alarms crush Glass EE like it did its predecessor? Probably not, but they could force Google to consider what kinds of changes it wants to implement on Glass v.3.

More like this
Innovation
19 hours ago
This high-tech camera may help protect our identities — here's how it works
By Molly Glick
Innovation
8.11.2022 11:00 AM
“Quantum materials” could give the human brain a run for its money, scientists say
By Nathaniel Scharping
Gaming
22 hours ago
You need to play the best vacation sim since Animal Crossing ASAP
By Hayes Madsen
Related Tags
Share: