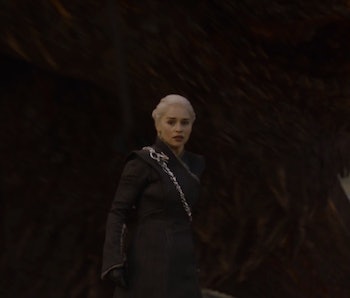 When Daenerys Targaryen unleashed her dragon and Dothraki horde on Sunday’s episode of Game of Thrones, she changed the game forever. As director Matt Shakman told Inverse, what Dany did was the equivalent of “introducing napalm or an atom bomb into the fighting.” But, the battle was monumental for a second, more symbolic way: It was the first time Daenerys stepped foot on the Westerosi mainland.

Season 7 of Game of Thrones has made a big deal of Dany’s homecoming so far. The season premiere ended with an almost wordless sequence of Dany taking her first steps on the island of Dragonstone, the Targaryen’s ancestral home and her birthplace. But, as important as her return to the west following six seasons of messing around in Esso was, she was still on an island. Dragonstone was essentially unguarded, and since it traditionally belonged to the Targaryens, she wasn’t really stepping foot on conquered ground. She’d been on Dragonstone before, albeit as a baby, but never in her life had the would-be queen of the Seven Kingdoms actually stood upon soil from one of those kingdoms.

That changed during Episode 4, “The Spoils of War,” when she hopped on Drogon’s back, got her Dothraki army to the Westerosi mainland for the first time in history, and torched Jaime Lannister and his troops. However, when Bronn made the shot of a lifetime and brought down Drogon, Dany quickly climbed off his back in an attempt to remove the giant arrow. Unlike her arrival on Dragonstone, this was not a moment of pomp and circumstance. It was a mother taking care of her child, jumping off the safety of his back without a moment’s hesitation.

It’s also worth noting that, as soon as she stepped foot on Westeros proper, someone tried to kill her. Jaime failed, of course, but it was still a nasty welcome.

The moment Dany steps foot on Westeros was understandably overshadowed by the flaming carnage and high stakes, but it’s pretty indicative of her conqueror’s journey so far. Winning the Seven Kingdoms isn’t going to be all about poignant symbolism and triumph. It’s going to be hectic and hard. With Cersei probably angrier than ever, and Jon Snow trying to enlist her help in fighting literally ice zombies up north, chances are Dany’s second visit to the Westerosi mainland probably won’t be much more relaxing than her first trip was.

Season 7 of HBO’s Game of Thrones continues on Sunday at 9 p.m. Eastern.