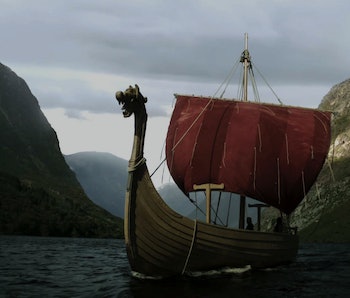 Vikings sailed the North Atlantic 1,000 years ago, sustained largely by a crucial protein: preserved fish. Cod and other so-called stockfish were hugely important staple foods for seafarers, but until now, there was little evidence that they shared — and profited from — their marine bounty. But according to new scientific findings, they also traded their stockpile of fish internationally.

The discovery of timeworn, out-of-place fish bones, coupled with modern technology, has enabled scientists to perform whole-genome reconstruction from ancient DNA, opening a window into how people shuttled these natural resources around and how the movement of protein shaped human communities in the first millennium, CE.

These findings, published in the journal Proceedings of the National Academy of Sciences on Monday, show that Vikings used fisheries to catch Atlantic cod (Gadus morhua) that they freeze-dried and carried on voyages as far as a thousand miles, moving back the known date that this practice began by up to 400 years.

“This is a potentially transformative development in the relationship between human groups, and between humans and the natural resources they extract,” says James Barrett, an archaeologist at Cambridge University and one of the authors on the paper. “One enters a world when large urban populations could be sustained, and when the ecological catchment (and potential footprint) of these populations could be spread over large distances.”

This work, a collaboration between the Centre for Ecological and Evolutionary Synthesis (CEES) at the University of Oslo and Cambridge University, confirms a long-standing but previously unconfirmed hypothesis that North Atlantic fish were transported internationally as early as the Viking Age (800-1066 CE). The findings could rewrite Viking history, which holds that this practice began during the medieval period (1066-1280 CE). This long-distance movement of protein, say the researchers, was a turning point in the development of urban populations in Europe.

And the research hinges on ancient cod bones, which researchers found at a site hundreds of miles from where they were fished from the ocean.

By reconstructing genomes from ancient cod bones found at Viking Age and medieval archaeological sites in Germany, Norway, and the United Kingdom, the researchers could compare the DNA of ancient fish with the DNA of modern populations. Despite the brittle quality of fish bones, they found that the ancient DNA was remarkably well-preserved, allowing statistically significant levels of correlation between ancient and modern fish populations.

Most notably, they matched Viking Age cod bones from a site in Haithabu, Germany to DNA from modern cod, and found that these millennium-old fish had been transported there from a well-established North East Arctic Atlantic cod population that Norwegians still exploit to this day. Norwegians rely heavily on cod fisheries for commercial and sustenance fishing, so the fishes’ movements are well-documented, allowing the researchers to be reasonably certain that the ancient fish share genetic similarities with modern fish.

And while this research might rewrite history, it may also shape the future. These new insights into ancient fisheries could help inform contemporary conservation movements.

“This provides remarkable insights into the antiquity of long-distance trade in marine resources in the region,” says Kristina Douglass, a professor of anthropology at George Mason University who was not involved in this study. “The perspectives gained from this research are vital to understanding long-term trends in marine resource exploitation. Given the many challenges we face today in sustainably managing marine resources around the world, it is vital that archaeologists integrate multiple scientific techniques in order to reconstruct in detail how people interacted with past marine environments.”

Correction 8/10/17: In the original version of this article, it was stated that the bone pictured is a cod jaw bone, when, in fact, it is a fin bone. The article has been edited to reflect that fact.

More like this
Science
Jan. 13, 2023
Ancient Siberian DNA upends our understanding of Native American migration
By Miriam Fauzia
Science
Jan. 22, 2023
Humans didn’t evolve to live in cold — our survival is a lesson in ingenuity
By The Conversation, Kyoko Yamaguchi and Laura Buck
Science
Jan. 24, 2023
Look: With a mouth full of teeth, this Pterosaur ate like a whale
By Jennifer Walter
LEARN SOMETHING NEW EVERY DAY.
Related Tags
Share: