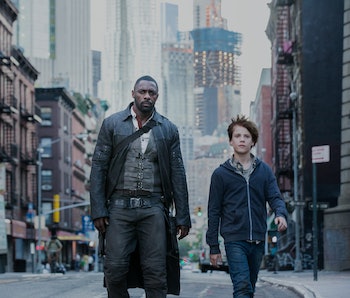 Stephen King considers his The Dark Tower books to be crowning achievement of his long and prolific career. And in spite of an overwhelmingly negative reaction from critics, the author seems pleased by the new movie The Dark Tower, which wwhich was directed by Nikolaj Arcel (A Royal Affair) and stars Idris Elba (Pacific Rim) and Matthew McConaughey. Part of enjoying the movie requires understanding its complex mythology, very casual fans and those unfamiliar with King’s work may have been scratching their heads throughout the film’s short 95-minut run time run time.

Functioning as both a sequel to the books as well as a loose adaptation of the first novel, 1981’s The Gunslinger, Arcel’s The Dark Tower had the difficult task of condensing King’s notoriously dense horror/post-apocalyptic/western/Arthurian fantasy into one single movie. So, for those confused by The Dark Tower, here are some of your lingering questions, answered.

First, what is the Dark Tower?

The Dark Tower is a tall, ominous structure that holds together the multiverse in place. Not unlike the Marvel Cinematic Universe or the DC Extended Universe, Stephen King has his own interconnected universe, meaning a number of his stories like It, The Shining, The Mist, The Stand (especially The Stand) all somehow connect to The Dark Tower. (That’s how much King loves this saga.)

As you saw in the film, there are multiple worlds, and Roland comes from Mid-World, while our world, “Keystone Earth” also continues to exist in parallel.

Who is Roland? What is a gunslinger?

Roland Deschain (Elba) is a Gunslinger, which was an order of reloading “knights” who kept the peace and performed diplomacyast living Gunslinger when the books begin, and it it pretty much much stays that wayay, at least until the end of The Dark Tower film,, which strongly hints that Jake Chambers (Tom Taylor) may succeed as his protege.

Who is Jake Chambers?

Jake Chambers is a kid from New York who joins the Gunslinger on his journey. He first appeared in The Gunslinger, during the year 1977,, and was dropped into Mid-World. Because of the way the last book in the series ended, Roland is doomed to live a cyclical journey until he “fixes” his mistake. That’s why Roland again meets Jake Chambers, this time hailing from a more contemporary time.

What is the “shine” that Jake had?

Remember how The Dark Tower is connected to King’s other books? That includes The Shining, King’s 1977 horror novel about a family man employed as an off-season caretaker of the Overlook Hotel,, who succumbs to his own madness. While the iconic Stanley Kubrick film isn’t being retroactively included in the new cinematic universe of The Dark Tower, Jake’s “shine” isn’t unlike the one felt by Danny, whose psychic powers began to manifest in strange ways throughout The Shining.

It’s also no accident that there’s a photo of the Overlook Hotel seen in Jake’s psychiatrist’s office. Hmm.

In case the movie didn’t make it clear, Keystone Earth feels tremors of the Dark Tower when it’s attacked because, once again, the Dark Tower keeps the multiverse together. Without the Dark Tower, all worlds will become overrun by evil forces. Monsters, demons, giant spiders perhaps, you name it. It’s bad. And the Man in Black (McConaughey) wants it all to go down.

Who is the Man in Black?

McConaughey’s antagonist named the Man in Black (and goes by many other identities, including Walter o’Din and Randall Flag) is an evil, ancient sorcerer who has strong psychic and mind control abilities. In the books, the Man in Black conspires with the Crimson King (more on him later) to bring down the Dark Tower, but in the film, it’s pretty much just the Man in Black.

The Man in Black has made appearances in other Stephen King books, most notably The Stand.

How could the Man in Black see through those orbs?

It’s a science-fiction movie. How else can a villain spy on his or her enemies?

So who is the Crimson King?

Set-up for the sequel! Just kidding. The Crimson King is the main bad guy of the books who wants to usher in chaos throughout the multiverse. The embodiment of evil, the Crimson King is a pretty straightforward monster, so it makes sense that the villain of the film wound up being the Man in Black. I do not know why the Crimson King’s name is scribbled inside the house. In all likelihood, it’s to maintain continuity.

Why did the Man in Black’s minions wear skin masks?

If the Crimson King is at the top of the food chain, then the Man in Black is just beneath him. That means the Man in Black commands the Can-toi, a hybrid race who descended from humans and Taheen, a separate race of creatures in Mid-World who had animal heads. In The Dark Tower, the Can-toi hole themselves up in the Dixie Pig in New York, which in the books are also populated by vampires.

Wait, back up a sec. Why was there a theme park in Mid-World?

Mid-World was once upon a time basically just like our world, only centuries have passed. In the books, relics of a contemporary time are found in Mid-World, such as the songs “Instant Karma” by John Lennon and “Hey Jude” by The Beatles, which is sung in The Gunslinger. There’s also a “Cult of Amoco,” people who worship the god Amoco, not knowing they’re just worshipping a chain of gas stations. So it’s not surprising that there would be theme parks lying around Mid-World. As Roland tells Jake, no one knows what those ancient structures are anymore.

How is Roland a descendant of King Arthur?

King Arthur of Eld was the King of All-World.. His wife, Rowena, was barren. So Arthur Eld took in gillies, where the line of Deschain came from. And yeah, Roland’s Sandalwood Guns were forged from Arthur Eld’s sword, Excalibur.

Is it the King Arthur? Who knows. As stated before, Mid-World is a parallel Earth. Our King Arthur may have been vastly different than the one Roland “descends” from.

This movie was crazy.

The Dark Tower is in theaters now.