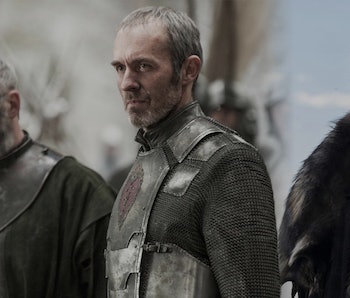 Game of Thrones fans will be quick to admit that the late Stannis Baratheon had many flaws (being a religious fanatic who burned your only daughter alive will hurt your reputation), but even his most ardent critics will acknowledge that he had the best grammar in all of Westeros. Stannis may be dead, but his legacy lives on through Davos Seaworth, as seen in an Easter egg from the most recent episode of Thrones.

In “The Spoils of War,” Davos, now the Hand of the King for Jon Snow, is talking with his lord during their ongoing visit with Daenerys Targaryen at Dragonstone. Jon, who appears to be growing fond of Dany, brings up how the North needs her and her dragons if they can possibly hope to fend off the Night King’s army.

“What?” a confused Jon says.

It’s a tic Davos certainly picked up from Stannis. When discussing things that you can count, it’s correct to use the word “fewer” instead of “less.” There can be less water in a glass, for instance, but fewer cups of water on a table.

Back in Season 2 Episode 4, Stannis corrected Davos when he said he didn’t mind having his fingers chopped off, as it meant “four less fingernails to clean.”

Then, in the fifth episode of Season 5, Stannis did it again while at Castle Black. When Bowen Marsh of the Night’s Watch endorses leaving the Wildlings to die on the other side of the wall, he proclaims that it’s “less enemies for us.”

From the back of the room, Stannis mutters “fewer” under his breath. Davos didn’t quite seem to get it at the time, but given that now he’s out here correcting his new king, the grammar lesson sunk in.

Not bad for a guy who couldn’t read just a few seasons ago.

Game of Thrones Season 7 is currently airing on Sunday nights at 9 p.m. on HBO.