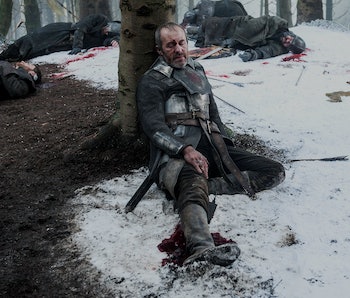 Stannis Baratheon — colloquially known as Stannish The Mannis in the Game of Thrones fandom — had a controversial character arc. In the book’s time line, he’s still alive and never burned his adorable daughter Shireen at the stake. In Game of Thrones Season 5, which was the first time the television show ventured beyond he books, Stannish burns his daughter, fails in battle, and gets killed by Brienne.

It’s a hasty decline for a stern yet smart character — and needless to say not every fan was pleased when it aired. But intriguingly, the way the scene played out originally had a very different emotional bent. In the show, Brienne finds him bleeding. After telling him she witnessed a “shadow with his face” murder his brother Renly, she states her intent to execute him. When she asks if Stannis has last words, he simply says “Go on. Do your duty.” While they’re fitting last words for a stern man of duty, it hardly encapsulates his emotional journey. Shireen isn’t even mentioned.

But as one fan pointed out on Reddit, the scene originally was far more about his daughter Shireen. The original script for the scene includes this:

STANNIS: Do you believe in the life to come?

STANNIS: I don’t. But if I’m wrong, and you’re right… tell Renly I’m sorry when you get there. I don’t imagine I’ll see him wherever I’m going. (beat) And my daughter. Tell her… tell her…

(‘Sorry’ doesn’t even begin to cover what he feels about Shireen. The thought of it brings tears to his eyes, and he’s not going to die weeping in front of a woman he doesn’t know. Stannis stares up at her.)

STANNIS: Go on, do your duty.

Although it doesn’t change the mechanics of the scene, it would have made a huge different for Stannis to acknowledge the wrong he did to Shireen on his deathbed. Luckily, there’s always George R. R. Martin’s novels to change this, assuming The Winds of Winter ever comes.

More like this
Entertainment
7 hours ago
New House of the Dragon “making-of” book plunges into the fantasy hit’s creation
By Jeff Spry
Entertainment
Jan. 23, 2023
Last of Us star Anna Torv unpacks Tess’ tragic moment: “Life had a different plan”
By Dais Johnston
Entertainment
Jan. 20, 2023
Legend of Vox Machina will continue — even if Dungeons and Dragons doesn't
By Eric Francisco
LEARN SOMETHING NEW EVERY DAY.
Related Tags
Share: