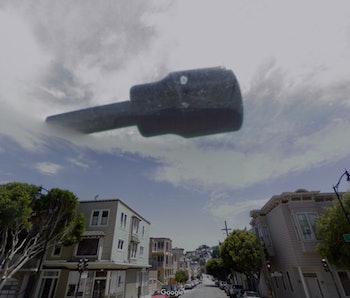 Google Street View was born 10 years ago in the Bay Area. While the company has used its nine-eyed cars to map just about every inch of the world, San Francisco seems to hold a special place in Street View’s cold, cloud-based heart. Though the main goal of the mapping service has always been to improve an app user’s ability to get around, the rovers have accidentally captured a lot of crazier images along the way.

This bear appears to have since escaped, as old Street View images for 2 Clarence Place appear to be wiped and the 2016 version no longer shows Smokey lurking in this window display. But we can thank Business Insider for this, er, quirky screen grab from 2014.

See also: This Google Map Says a Lot About How Germans Value Privacy

Just because they share their home with Google doesn’t mean San Franciscans love the company — or its Street View cars. Far from it. This Hawaiian shirt-wearing passerby sums up tensions in the city with this highly photogenic move. The middle fingers up moment happened on the appropriately moodily-named Hemlock Street.

For eight years this Street View image from Jones Street has kept viewers on the edge of their seats. Does the guy throwing his trash away make his shot? Or is it an airball? That shot looks like money from here, but maps are known to be deceiving. If you have any information about the whereabouts of this can or the status of the shot, don’t hesitate to contact Inverse.

This is either a bold statement or a sad, paint-ruining prank. The sticker-covered car, was captured back in 2007, according to the blog Google Street View Sightings, making it one of the first images collected by the car mapping program. We hope the stickered eyesore has had as great a decade as Google.

It may have a new coat of paint and a well-trimmed tree obstructing its facade, but 2640 Steiner Street will forever be Mrs. Doubtfire’s home.

And this isn’t the only San Francisco architectural gem to appear in quintessential 1990s media. The Full House home is across town at 1709 Broderick Street.

In a row of houses collectively known as “the painted ladies,” the equally tree-covered home was recently purchased by Full House creator Jeff Franklin.

Over the years, Google has had a few glitches. This melting car — and an entire melting town in New York state — are supposedly both caused by faulty cameras. But no one would be surprised to learn they’re actually bona fide portals to hell.

This UFO — or, you know, another glitch with a Street View camera — looks like a super solid guitar case. The aliens may not have come in peace, but they clearly came to rock.