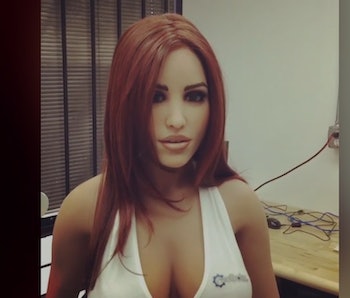 Many RealDoll customers are men who have deliberately made the choice to remove real women from their lives, says Matt McMullen, CEO of Abyss Creations, a company that makes the realistic sex mannequins. At least, those men say it was deliberate.

McMullen told MelMagazine that he understands their choices to court animatronic sex toys over real women. “For a guy who’s already foreseeing a messy divorce and thinking, ‘I don’t want to spend my money on that,’ this makes perfect sense,” he says.

Having eschewed human women, these men are turning to companies like RealDoll, which integrates a rudimentary artificial intelligence personality into robotic sex puppets.

The group, which calls itself Men Going Their Own Way or MGTOW, claims the financial and emotional burdens of marriage, divorce, and infidelity outweigh the benefits of human relationships. A part of the men’s rights movement, its members hope sexbots will provide fulfilling relationships and, in the misogynistic words of MGTOW acolyte and far-right provocateur Milo Yiannopoulos, “won’t be programmed to whinge endlessly about the wage gap.”

In 1997, McMullen decided to take his hobby of sculpting figures of women in his garage to the next level, founding Abyss Creations in San Marco, California. He says that once RealDoll 3.0, which he has named “Harmony,” launches, it will be more about intelligence and personality. He hopes that customers will be so inspired that they see Harmony as a muse and take up sex robot photography or painting of sex robots. While there’s no price tag set for RealDoll 3.0 yet, previous models cost just under $15,000.

For McMullen, Abyss Creations is about creating artificial intelligence sex robots that are so life-like, people treat them like the partners they’ve chosen to avoid.

But Harmony’s personality is still rudimentary: The allegedly meaningful interactions she simulates involve various personality settings that range from “jealous” to “giving.”

This might be enough for the men’s rights activists who celebrate the future of sexbots. Based on their discussions on Reddit, they seem to want the robot to be as lifelike as possible, just so long as they can’t complain or be unhappy. They’re excited about the prospect that Harmony can remember their favorite food, and seem fine with that being the extent of their relationship.

While romantic relationships are not for everybody — many aromantic or asexual people don’t feel the need to find a partner — the reason men’s rights activists are choosing RealDolls over women is altogether different. They are more interested in turning sexuality into a video game designed solely for male enjoyment where they can compliment Harmony simply to raise its “desire meter.”

McMullen argues criticisms of RealDoll are unwarranted, suggesting a lifelike sex doll could help lonely people who are intimidated by interpersonal interactions. Not all customers are men’s rights activists and could just want to try something new or become more comfortable with their own sexuality. But he didn’t respond to the critique that Harmony can only offer an illusion of empathy or that partnering up with a sex doll will allow men’s rights activists to further dehumanize and justify violence against women.

More like this
Innovation
7.28.2022 11:15 AM
A new robotic twist on the “Turing test” fools human subjects
By Sarah Wells
Innovation
8.1.2022 9:00 PM
This mind-bending material could turn us into chameleons
By Molly Glick
Innovation
8.5.2022 11:00 AM
Alexa could diagnose Alzheimer’s and other brain conditions — should it?
By Joanna Thompson
Related Tags
Share: