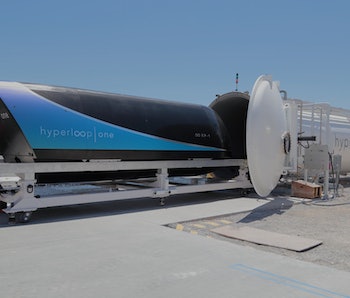 On July 29, Hyperloop One conducted its second full-scale hyperloop test, flinging a pod the size of a small bus down a vacuum-sealed tube at 192 miles per hour. As far as Hyperloop One’s CEO Rob Lloyd is concerned, this is it: a functional hyperloop. Now, he only has one question: “Who wants to go first?”

“This is now the hyperloop,” says Lloyd. “That’s what the world expected, and that’s what we’ve been building,. Today, we pivot from demonstrating to the world that the technology works, which we’ve done, to the commercialization of the technology. Now we want to engage with real customers in the United States and around the world and say: ‘Let’s build this thing,’ and ‘Who wants to go first?’”

Lloyd’s stated goal is to have three functioning hyperloop systems operating by 2021. The company’s phase two is tackling the myriad issues that stand in the way of a marketable system: how to get freight or passengers in and out of the pods and tubes, how to design an airlock system to maintain the tube’s vacuum, and how to sell the system to companies as a viable alternative to freight trains and long-haul trucking.

To get there, Lloyd says Hyperloop One is fundamentally a “partnership company.” The plan starts with “working with governments in a collaborative way” to identify the most logical of the first proposed hyperloop routes. Then, Lloyd says he wants to encourage those first routes to become an “innovation center,” or a “cluster” where the installation and development of a hyperloop system “will generate a huge amount of opportunity” for “dozens if not hundreds of companies” to “flourish in this ecosystem.”

And it’s clear he feels pretty good about his company’s place in the race.

“We expect competition,” says Lloyd. “There is competition. We welcome competition because it makes companies better. We’re the only company in the world that’s developed and built the hyperloop.”

Another thing Lloyd’s really not worried about is speed. The July 29 test propelled Hyperloop One’s pod at 192 miles per hour, 2.7 times faster than the 69 mph first test. Musk’s initial white paper for the hyperloop in 2014 envisioned the system reaching speeds of up to 700 miles per hour. While that hasn’t been physically tested — not even close — Lloyd says it’s just a matter of scale.

“It’s constrained by the length of the tube,” Lloyd tells Inverse. “Speed is not our concern.” Hyperloop One’s test tube is 500 meters long (its engineers use the metric system — that’s about 1,640 feet). In the first test, it had 30 meters of motor, which is the part of the track that propels the pod forward. In the second test, the company increased that to 300 meters of motor, tripled its horsepower, and expanded the levitation track to the entire length of the tube. “We know if we increased the length of motor from 300 meters by another 2,000 meters we would go 700 miles an hour,” Lloyd says. “Specifically, we know that. It’s mathematically proven. We can put more juice into the system and we can hit 700 miles an hour. The question is, do we want to do that now?”

Instead, Lloyd says the company is focused on getting an airlock system in place. Human tests for the system are still at least a couple of years away. He says the company will have to work with federal regulators to make sure the system is tested safely and legally.

So far, it’s all going according to plan.

More like this
Innovation
23 hours ago
Robots are ready to get touchy-feely
By Sarah Wells
Innovation
6.29.2022 6:00 PM
Can cars run on water? The science of a TikTok conspiracy theory, explained
By Andrew Moseman
Innovation
6.27.2022 8:00 PM
Artificial photosynthesis can grow plants without light — and may solve a planetary dilemma
By Steph Lee
Share: