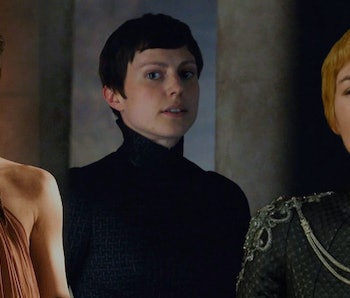 Now that Cersei has the Iron Throne in Game of Thrones Season 7, times are a-changing in King’s Landing. The biggest indicator of Cersei’s power isn’t her redecorated throne room or even her big, fancy outdoor map. It’s Bernadette’s new ‘do. You know, everyone’s favorite character!

If you’ve never heard of Bernadette, that’s because she’s an extremely minor character. She’s a House Lannister handmaiden who has appeared intermittently throughout the series. She announced Tyrion’s presence to Sansa before his proposal in the third season, and in Season 6 she assisted Cersei with her wardrobe before the infamous Sept explosion.

Bernadette has always been loyal to Cersei, and in Season 7 she expresses this with a dramatic makeover. In “The Queen’s Justice,” Cersei carelessly answers the door to her bedchamber after spending the night with Jaime. He’s uneasy with the prospect of flaunting their relationship, but Cersei is queen and does what she wants.

Immediately after Cersei waves off Jaime’s concerns, Bernadette appears at the door with newly shorn hair and dramatic black clothing, high neckline and all.

One eagle-eyed Game of Thrones fan pointed out Bernadette’s dramatic makeover on Twitter with a Mean Girls joke:

When Cersei had long, flowing hair and airy dresses, Bernadette did too. Now, Bernadette looks like she’s about to give Morticia Addams a run for her money — just like her employer.

Small, subtle details like this, or the nods to Jon Snow’s real dad, show how meticulously Game of Thrones weaves its storylines together.

New episodes of Game of Thrones Season 7 are currently airing on Sunday nights on HBO.