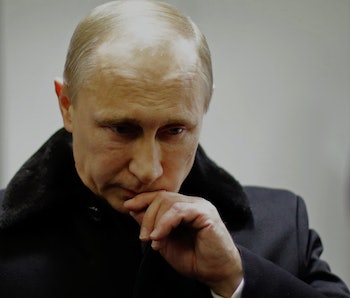 Vladimir Putin wants desperately to convince you he’s a man of action. A graduate of the “Sun’s Out, Guns Out” School of Politics, he’s posed shirtless on horseback, given martial arts demonstrations, and claims to have retrieved ancient relics from the deep. But a fresh lawsuit from a former professional web troll for the Russian government provides a glimpse behind the curtain of Putin propaganda. And the heart of the Russian president is not strong like bear, but weak like teacup pig.

In her lawsuit, Lyudmila Savchuk says that in December she was hired to work 12-hour shifts posting comments on assigned political subjects across the web in exchange for a monthly salary of 41,000 rubles, or $778 dollars, cash in hand. The paperwork, tax-free pay system provides the legal pretext of her suit, which her attorney says is really just an excuse to force the troll army into the limited Russian sunlight. St. Petersburg human rights organization Kommanda-29 is already using the court action to go after documents on the organization's workings.

Putin’s battle for the hearts and minds of LiveJournal was revealed to the world last month in a Guardian expose. Bloggers would toil in cyber salt mines, camouflaging their political agenda with seemingly harmless posts like “Europe’s 20 Most Beautiful Castles” so readers couldn’t tell the grassroots from the astroturf.

"The scariest thing is when you talk to your friends and they are repeating the same things you saw in the technical tasks, and you realize that all of this is having an effect," one worker said.

Hopefully this suit results in some good old fashioned public oversight, but given Putin’s unsettling history of disappearances, assassinations, and incarcerations, any blog commenters looking to pile onto their president should probably reconsider. Putin wants the Internet to like him, and making the Internet like anything requires an industrial-level operation. We may now get to see just how huge the Kremlin’s machine really is.