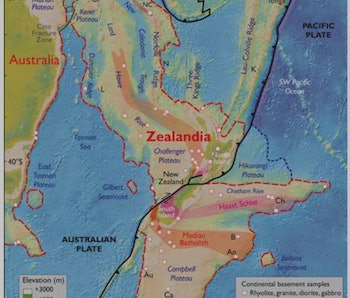 In February, researchers publishing in Geological Society of America’s journal, GSA Today, made a bold claim: There’s an eighth continent. This continent, which they named Zealandia, spans five million square kilometers, which suggests that it would be pretty easy to see — if 94 percent of it wasn’t submerged underwater.

In an interview with Nature in February, lead researcher Nick Mortimer explained that the continent would have been recognized sooner “if we could pull a plug on the world’s oceans.” While he and his team can’t exactly drain the Pacific Ocean, they can do the next best thing—go digging.

The researchers set sail out of Townsville, Australia on Friday in search of the lost continent.

They estimate that the islands of New Caledonia and New Zealand, which bob around in the South Pacific, are part of Zealandia. For the next two months, the scientists will sail around this area to collect samples of rocks and earth from the sea floor using a drill ship.

As they analyze the samples onboard, they hope to find evidence to support their theory that Zealandia is in fact a submerged continent and not just part of the ocean floor. While there isn’t an official checklist of what determines whether a piece of land is or isn’t a continent, there are four traits that scientists generally agree on. According to their paper, continents need to have:

[High] elevation relative to regions floored by oceanic crust, a broad range of siliceous igneous, metamorphic, and sedimentary rocks, thicker crush and lower seismic velocity structure than oceanic crustal regions, and well-defined limits around a large enough area to be considered a continent rather than a microcontinent or continental fragment.

This journey has been a decade in the making, as Mortimer and team have been making the case for Zealandia since 1995. While they can look forward to some major fame and fanfare if they succeed in making Zealandia the official eighth continent, the trip will be fruitful, regardless of how the scientific community responds to their work. Mortimer argues that their findings will inevitably shed light on how the continental crust can be reshaped as well as reveal more about ongoing changes in global climate.

More like this
Science
6.23.2022 11:00 AM
Historic Yellowstone flooding and more: Understand the world through 8 images
By Robin Bea
Science
9 hours ago
Space scientists unveil new evidence icy ocean worlds can host life
By EVAN GOUGH and Universe Today
Science
8 hours ago
The greatest dinosaur sci-fi franchise ever reveals a problematic genetics debate
By Andrew Maynard and The Conversation
Share: