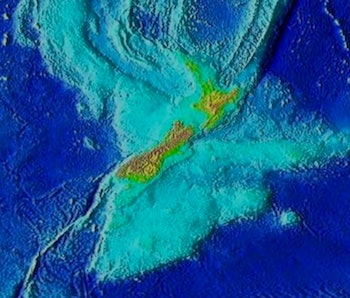 Hollywood has long fantasized about the existence of a “lost continent,” but nothing screenwriters have dreamed up is as cool as the real thing: On Thursday scientists released new evidence for the existence of an eighth continent, which they named Zealandia. Located predominantly beneath the surface of the southwest Pacific Ocean, the existence of Zealandia as a continent is a reality that the scientists that discovered it can barely believe.

“Continents are Earth’s largest surficial solid objects, and it seems unlikely that a new one could ever be proposed,” the scientists write in GSA Today, while proposing exactly that. “This is not a sudden discovery but a gradual realization; as recently as 10 years ago we would not have had the data or confidence in interpretation to write this paper.”

Those looking to gaze firsthand at Zealandia might be disappointed: 94 percent of it is submerged under the sea. But the remaining six percent is already well known to those acquainted with a map; new geophysical data reveals that Australia’s neighbors, New Zealand and New Caledonia, aren’t scattered islands but rather part of an unseen continent that spans five million square kilometers. Lead researcher and geologist Nick Mortimer, Ph.D., explained to Nature that, “[if] you could pull a plug on the world’s oceans, then Zealandia would probably long ago have been recognized as a continent.”

Mortimer and his team have been pushing for Zealandia to be considered a continent for the past decade, while its existence and name were first proposed in 1995 by American geophysicist Bruce Luyendyk, Ph.D. With the use of satellite maps that incorporate Earth’s gravitational field, this paper adds the new knowledge that 100 million years ago Zealandia began to move away from the supercontinent Gondwana. When Zealandia pulled away, it became very thin, but it also became a single, intact piece of continental crust worthy of being considered a continent.

But part of the problem of getting the massive region recognized as a continent is the fact that scientists can’t decide on what the definition of a continent is. In GSA Today, Mortimer and his team write that scientists generally agree continents share four attributes: “high elevation relative to regions floored by oceanic crust, a broad range of siliceous igneous, metamorphic, and sedimentary rocks, thicker crush and lower seismic velocity structure than oceanic crustal regions, and well-defined limits around a large enough area to be considered a continent rather than a microcontinent or continental fragment.”

But there is no international body or committee that decides what landmasses can be called a continent, and there is no official decision for how large a piece of continental crust needs to be before it officially gets that title. While this paper “formally puts forth the scientific case for the continent of Zealandia,” what the landmass really needs to cement its status is for popular culture to accept it as such. Eurasia, Africa, North America, South America, Antartica, and Australia have all benefited from hundreds of years of branding — now it may be Zealandia’s turn.