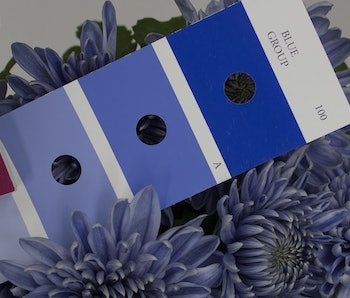 Before synthetic dyes, people would use nature’s pigments to color fabrics. Dried insects were used to make reds, while saffron and even cow urine were used to dye things yellow. Blue required indigo plants. But while indigo has been blue-ing textiles for thousands of years, it’s technically more of a bluish purple. The color indigo actually falls in the part of the visible light spectrum that’s wedged between blue (475 nm) and violet (400 nm.) According to scientists, true blue flowers are near-impossible to find in nature.

But genetic engineering has revealed what true blue really looks like.

On Wednesday, scientists from the National Agriculture and Food Research Organization in Japan reported in the journal Science Advances that they’d used genetic engineering to create a blue chrysanthemum. They did so by adding two blue-making genes to the plant genome — a deceptively complicated feat that other plant biologists have attempted and failed. In the 1990s, the Australian venture company Florigene and the Japanese brewing and distilling company Suntory teamed up to genetically modify the world’s first true blue rose, isolating the genes for the blue pigment and creating the first true blue rose in 2004. But even though the rose was genetically blue, it really looked more purple.

The molecule that gives flowers their true blue color, known as anthocyanin, is very finicky. Anthocyanin is a blue pigment, but it can easily shift toward red or purple, depending on the sugar molecules attached to it or the acidity or basicity of its environment. These factors make it extremely difficult to have a genetically and visually blue flower.

To create the blue chrysanthemum, the Japanese researchers needed to first engineer the flower to produce anthocyanin. The introduction of the anthocyanin-producing gene caused the normally pinkish red flower to appear purple. The next step was to nudge it closer to “true blue,” which they did by adding a gene that would add a sugar molecule to the anthocyanin.

Just because it’s a genetically blue chrysanthemum, however, doesn’t mean that admirers will be able to tell the difference between true blue and indigo. Besides, what we think of when we imagine the color blue has also changed over time: When philologists analyzed ancient texts, they noticed that a lot of ancient languages did not have a specific word for blue. Not having a word for the color blue suggests that our ancestors did not see blue at all. Indigo, it seems, might just be blue enough.