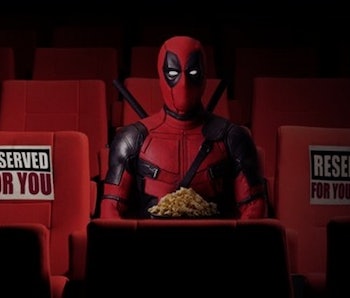 From the very start, with its crude and self-referential opening credits — it was “Some Douchebag’s Film” starring “God’s Perfect Idiot” — Deadpool announced itself as a new kind of superhero movie. In short, it knew it was a movie.

Ryan Reynolds’ long-awaited adaptation of the comic book anti-hero was a smash hit, and not just because the character was liberal in dishing out both curse words and beatdowns. Filled with fourth wall breaks and nods to the audience, Deadpool was incredibly self-aware, and let the audience in on the joke, taking the piss out of the clichés, tropes, and more cynical elements of modern-day blockbusters.

But with a sequel due out in June 2018, it becomes part of the culture it so thoroughly mocked. There’s a danger to that, but according to Deadpool 2 director, David Leitch (Atomic Blonde, John Wick), there’s no chance that the sequel will lose that self-awareness.

“I think that there are opportunities there that are inherent,” Leitch told Inverse when asked whether the film would still mock other superhero movies, and more importantly, itself. “Look, the DNA of Deadpool is what drew me to it, what that whole team created. That world is what drew me to do it when I was offered the sequel.”

When making the first Deadpool, Reynolds and the filmmaking team — it was directed by Tim Miller and written by Rhett Reese and Paul Wernick — had little to lose. The movie was given a lower budget by 20th Century Fox, and it carried modest expectations. Because it made nearly $800 million worldwide, there was — and perhaps still is — at least a chance they would play it more safe on this sequel, given the higher expectations.

Leitch didn’t want to necessarily confirm that the film would straight-up acknowledge that it is a sequel — “We’ll see. I leave that. I don’t want to spoil anything,” he said — he also didn’t shy away from the speculation that the Merc with a Mouth will comment on it.

“I’m excited to find those opportunities to have even more satire, and to have fun, as they did in the first,” Leitch said. “Like, hey, we’re making a sequel on something that’s self referential. Ryan understands that universe and that tone, and he is basically is Deadpool.”