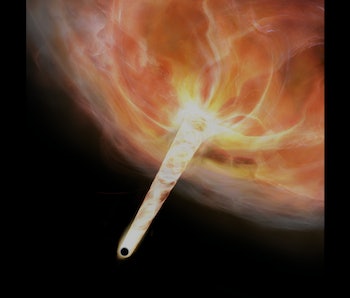 Clouds move at a snail’s pace in Earth’s atmosphere, but in outer space, they’re capable of zooming through at speeds nearing 178,000 mph. That’s how fast a pair of light-year long cosmic clouds streaming through the Milky Way. And it’s perhaps more than just the icing on top that these speedy buggers could be key to spotlighting black holes secretly lurking throughout the galaxy.

Way over in the center of our galaxy, the supermassive black hole known as Sgr A is surrounded by a thick swath of warm, molecular gas, stretching about 650 million light-years across. Some of that gas as clumped up into discrete clouds, capable of moving around with extremely broad velocity widths. Scientists at Keio University in Japan, using the James Clerk Maxwell Telescope in Hawaii have managed to characterize two of these high-velocity clouds, which, as they outline in a new paper published in The Astrophysical Journal Letters*, could give astronomers a loose roadmap to the black holes allegedly hiding in every nook and cranny in the Milky Way.

The sprinter clouds are remarkably similar, and the Japanese astronomers believe they probably originated in the same way. After nixing various explanations for one reason or another, they posit that the clouds were created by a massive objects colliding into a nearby molecular cloud. Because there aren’t any luminous stars in the region which could have feasibly created the clouds, the objects are presumed to be invisible black holes.

That explanation seems to make sense! There is no observational data to support it, but the numbers are on the astronomers’ side: it’s estimated that about 10,000 black holes lurk within the central 30 light-year radius of the center of the Milky Way. So odds are good that an invisible black hole is to blame for this super-fast clouds.

It’s just a matter of actually proving that. And scientists are in a better shape to do so than ever — the instruments and equipment used to identify where black holes are located have become more and more refined in the last couple of years. The quest to actually snap an image of black hole is still ongoing, but it will happen soon enough — and when it does, that data could allow astronomers to know precisely what to look for to finally pinpoint where all the hidden black holes in our galaxy are located.