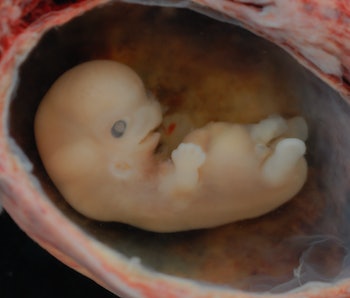 A team of scientists in Oregon successfully used the powerful genetic re-writing technique known as CRISPR to edit human embryos, the MIT Technology Review reported on Wednesday. While CRISPR-mediated gene editing has been ongoing for several years now, the scientific community has been generally leery of applying it to humans because of the implications it might have for our evolution.

Still, it wasn’t the first the first time someone had used CRISPR on human embryos. A team in China had done so previously in 2015, but with limited success. The edits were imperfect and only altered some of the cells in the embryos, resulting in chimeral embryos with multiple genomes. The Oregon embryo edit was reportedly much more successful, creating alterations that — were those embryos implanted and allowed to grow to term into a human being that then had kids — could reliably be passed down through the generations. That’s what’s called a germline edit.

It might seem surprising to learn that this is legal at all in the United States, which has had long, drawn-out political battles in recent decades over even stem cell research. And there are serious unresolved concerns around profiteering on the creation of “designer babies.”

But as it turns out, gene editing in humans is not a problem — not a legal one, anyway. As STAT reported earlier this year, the closest we have to a law forbidding it is one that prevents the Food and Drug Administration from reviewing “research in which a human embryo is intentionally created or modified to include a heritable genetic modification.”

But the FDA’s approval is only necessary for medical treatments that are used on actual human beings. Simple laboratory research on embryos that will never be implanted isn’t covered — and there’s no law directly preventing gene-editing them.

Scientists, legal scholars, and bioethicists differ among themselves in just how worried they are about the moral and legal questions CRISPR has raised. But the most up-to-date guidance on CRISPR assumes that sooner or later, the germ-line editing train will pull out the station.

More like this
Science
6.22.2022 8:26 PM
Yes, there are mites living on your face — and they can poop, a new study finds
By Allison Parshall
Science
7.2.2022 12:00 PM
Why is my cat scratching furniture? The answer might surprise you
By Tara Yarlagadda
Science
6.27.2022 11:00 AM
Letting your cat go outside could spread “life-threatening” parasites — new research
By Amy Wilson, Scott Wilson and The Conversation
Related Tags
Share: