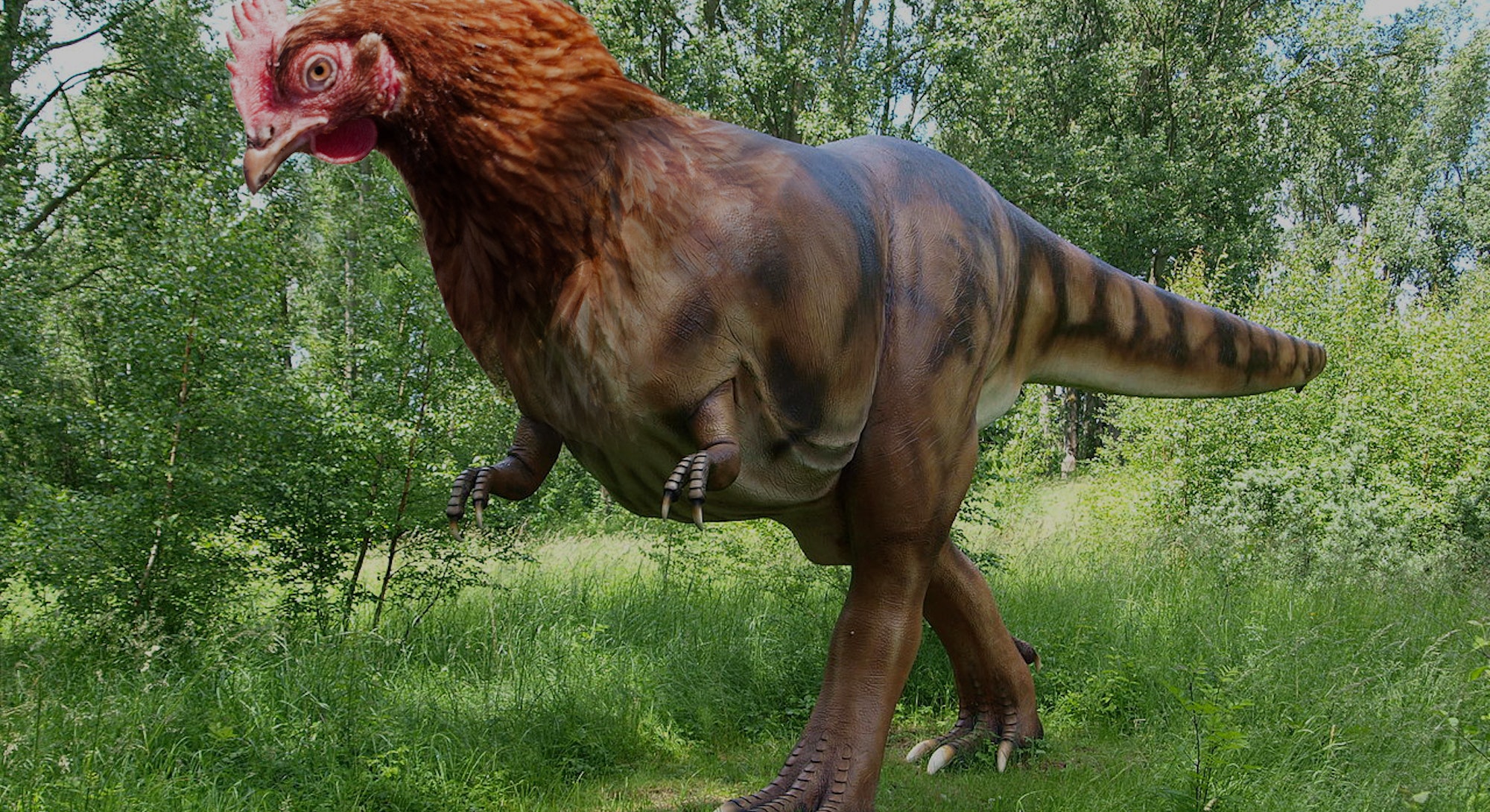 A few years ago Bhart-Anjan Bhullar, then a Ph.D. student in Arhat Abzhanov’s lab at Harvard, did something pretty incredible: He took an embryonic chicken and inhibited a couple of genes during its development. It was a tiny adjustment that produced a pretty amazing result: “Those chickens that were altered in that way, they grew up to have a snout that looked like a dinosaur snout,” he tells Inverse.

Bhullar’s research exists at the strange intersection of molecular biology and paleontology. When he’s not teaching at Yale, he’s investigating how major distinguishing features of animal groups came about — in this case the bird beak. It might not seem like a big deal, but understanding how the bird beak came about is incredibly integral to figuring out not just how modern animals evolved but also understanding the dinosaurs that roamed the Earth before — and what animals might next roam this planet.

To be clear, Bhullar is not exactly trying to reverse-engineer a dinosaur from a chicken. And yet, by his reckoning in 15 or 20 years we’ll have all the necessary tools and information to hatch a living, breathing, dino-chicken that runs around snatching up prey in its toothy snout like a little velociraptor. “This isn’t theoretical,” he says. “I’m not talking half a century here; I’m talking decades. It’s going to happen.”

Birds aren’t just the closest living relatives of dinosaurs — they are dinosaurs. The term “dinosaur” defines a very large group of animals with a huge diversity of traits that all descended from a common ancestor and ruled the world for many millions of years. A short history lesson: After the asteroid hit, almost all of them died out. But not all of them. Some dinosaurs — little things with wings and feathers and beaks — made it out OK, and from them, over 65 million years, emerged the 20,000 species of bird that call Planet Earth home today. If you could trace a chicken’s genetic ancestry back far enough, you’ll get that looks very much like the dinosaurs of our fossil record and of our imaginations.

“The secrets of the history of living things are locked away still in its inheritance, and specifically in the genome,” says Bhullar. It’s not that all of the genetic information of the chicken’s distant ancestor’s are still hidden in its DNA, but a lot of it is, or at least potentially is.

In particular, vertebrates tend to evolve very subtly over time, Bhullar explains. “There are only certain variations in anatomy that vertebrates produce, and it’s probably because we’re so intricate, we’re so complex, that majorly screwing something up early on is not going to easily produce a viable living thing.”

At the level of molecular development, the difference between a bird beak and a dinosaur snout is small — it’s enough to slightly tweak the expression of certain genes in a developing embryo to make one rather than the other. The beak, as it turns out, is a super overgrown adaptation of the premaxilla — a pair of tiny bones that sit at the very front of the face and house the incisors.

About 85 million years ago, a branch of the dinosaur family tree had basically already figured out the bird body plan. These were small, carnivorous theropods, related to Velociraptor and Tyrannosaurus rex. They had feathers, wings, bird-like bodies, and bird-like brains. They could fly. But they still had little toothy dinosaur snouts. The famous Archaeopteryx is a good example.

Then, quite suddenly — at least from a geological perspective — the first beaks appeared. Those transitional animals still had toothy jaws, except with a beak in front, as if it had been glued on, Bhullar explains.

Millions of years passed, the bird-line dinosaurs lost their teeth, and their jaw bones shrank to basically nothing. They’re left with nothing but a big honking beak. But that big honking beak, it seems, was just what they needed to survive the apocalypse.

“The things that survived at the end of the Cretaceous, by and large, were things that were able to utilize food sources like seeds and insects and other kinds of nutrition that would have been available in a post-cataclysm world,” says Bhullar. “And the way the beak works, it allows for rapid, precision acquisition of small food items on a very complicated background. You can imagine walking along some detritus of a destroyed forest, and there’s just pebbles and ash and all kinds of crap on the ground, and you’ve got to pick out, with your Big Bird eyes and Big Bird brain, the little tiny bits of things that are actually edible.”

It’s worth noting that those other forms of bird-like dinosaurs — the ones with the toothy snout, and the ones with the hybrid snout/beak — were still around and doing fine when the asteroid blew a hole right through Earth’s crust. But none of them made it out the other side. “All of the things that didn’t have a fully modern beak died, and several things, independently, that had the modern bird beak, survived,” says Bhullar.

Why exactly dinosaurs grew the first beaks 85 million years ago, it’s hard to say. But Bhullar thinks it has something to do with hands. Theropods like velociraptor had long, clawed dino-hands with which to snatch their prey. “Those giant hands are the scaffold upon which the bird wing was built,” he says, and eventually the hands and fingers were lost, too, in favor of more efficient flight.

The question, “What is a beak?” is the starting point to understanding where they come from and how, at a molecular level, genes act on a developing embryo to make one. And from there, a beak can be undone.

Bhullar never hatched his dino-snouted chickens, because the objective of the experiment was to investigate developmental pathways, not see if these mutant creatures could hatch, breathe, eat, and walk around. They were terminated when their skulls were developed enough within the shell to verify that yes, their heads looked like little baby dinosaur heads.

For the record, though, Bhullar thinks they would have made it out OK. “Everything look kind of organized; they didn’t look super messed up or deformed, they were just transformed.”

It wouldn’t take too many of these little tweaks to go from a chicken to a something that looks a lot more dinosaurian, he says. And we have the technology to do it today. The only snag is figuring out which little snippets of genetic code need to be swapped out and replaced.

“We’re talking using existing resources and existing resources to do this, and the only thing that actually limits us is our basic scientific understanding of what parts of the genome are really controlling these changes. If someone came from the future and just gave us literally a Word document — it would probably only have to be about two pages long — with a list of stretches of the genome to swap out in between alligator and bird, we’d be golden. We could do it right now.”

What exactly to swap out those sections with would be a matter of experimentation. You could use an alligator or a crocodile — the closest relatives of birds and dinosaurs. You could also use computer software to digitally reconstruct the genome of the last common ancestor of birds and crocodiles, and use that for your replacement DNA.

All of this can happen thanks to a recent technology called CRISPR, which makes it possible to edit genomes at a very fine level by inserting, removing, or replacing small segments. In Bhullar’s telling, it’s “utterly transformative; the hype is real — CRISPR is amazing.”

Sure, but here’s the thing: We’re not a long way off from a world where we can synthesize entire genomes from scratch. And that’s when things will get even weirder. That reconstructed genome for the common ancestor of a bird and a crocodile? We could make that thing. Bhullar’s working on a fossil from an early ancestor of a crocodile right now that looks like a little land-based, predatory dinosaurs that’s built like a greyhound — it might end up something like that.

“Or, using the comparative computer software that we have for looking at genomes, you could be like, ‘OK, first reconstruct the ancestral form, but then kick it up to make it a little more like the bird side.’ So you’re kind of edging up the tree towards birds, which is basically like going through dinosaur evolution,” he says. “I bet you you’d eventually get a little, like, velociraptor.”

Even if we could synthesize genomes in their entirety, we can’t exactly just build a T. rex, since we don’t have any preserved dinosaur DNA. Despite what Jurassic Park would have you believe, genetic material doesn’t keep very well over 65 million years.

But more recently extinct creatures? We could make them. “We have the Neanderthal genome; that’s amazing. We have the mammoth genome; that’s mind-boggling,” says Bhullar. “Somebody’s going to definitely bring back Neanderthals and it’s going to be super interesting, and all of a sudden we’re going to have two species of humans on the Earth.”

Obviously, the ethical considerations of doing any of this are pretty heavy, which is why Bhullar, for now, is content to live in the world of basic science, where beakless chicken embryos are only allowed to develop to the point necessary to verify the hypothesis.

“It’s not something that I want to jump on, and yet, this will happen; the era of designer organisms is upon us,” he says. “I would prefer to do my discovery-based work and understand the world and change it by increasing people’s knowledge and people’s satisfaction with their lives, and hopefully their compassion and their understanding, more than I would like to change it by releasing all these genetically modified organisms.”