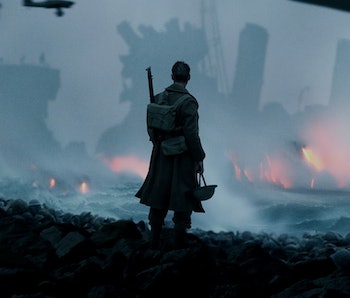 In May 1940, British and French civilians came for their soldiers, who were stranded on the beaches of Dunkirk, besieged by the Nazi forces that had just occupied France. Traveling on their fishing vessels or small yachts, these ordinary citizens saved the lives of 330,000 soldiers.

But in his dramatization of the event, Christopher Nolan comes for your ears.

His new film, Dunkirk, isn’t just louder than the battle itself. The movie’s score is intentionally designed to generate unprecedented drama, and it does so with the help of an auditory Jedi mind trick.

“There’s an audio illusion, if you will, in music called a ‘Shepard tone’,” Nolan told Business Insider in July. “It’s an illusion where there’s a continuing ascension of tone. It’s a corkscrew effect. It’s always going up and up and up but it never goes outside of its range.”

The auditory “corkscrew” he’s talking about isn’t just any fluctuating melody. Psychology research suggests that the Shepard tone is a particular collection of notes that can drive a person positively mad.

Developed in 1964 by cognitive scientist Robert N. Shepard, the whole operation is like an impossible staircase, or rotating snakes, for the ears. To create it, a composer or computer takes a set of notes an octave apart and plays them on repeat, as YouTuber Vihart explains in a video on Shepard tones that comes with a headache and nausea warning. Listening gives the sensation that the tone is gradually falling or rising, when really, it stays constant.

This strategy has been used in many spooky movies, but no one’s ever used this “barber pole of sound” quite like Nolan. It’s present in every one of his movies: most notably, the cosmic whine in Interstellar and, to a lesser degree, in the creeping drone in The Dark Knight Rises. When you aren’t aware it’s happening, hearing it can provoke unexpected emotions and legitimate anxiety.

A 2016 study of the Shepard-Risset Glissando (its scientific name), published in the journal Frontiers in Psychology, attempted to explain why we react so strongly to this unending earful.

In the study, participants were asked to report the emotions triggered by a pure Shepard tone, a Shepard tone in a song, and an ordinary glissando from Iannis Xenakis’s Metastasis, which actually glides from one pitch to another. Though the study was small, with just 73 participants, the results were telling.

When listening to the Shepard tone, either on its own or in a song, participants reported a “disruption of equilibrium, frequently leading to the associated feeling of falling.” This suggests that there’s something unnerving about the expectations the glissando sets up — and fails to achieve. Listeners are led to believe the supposedly rising tones will eventually peak. Because they don’t, we’re left waiting, often on the edge of our seats.

Just try listen to this raw Shepard tone yourself and try not to feel something when the rockets won’t just take off already:

Of course, the Dunkirk director could have turned up the intensity with a different track. Music of any kind has a special pull on humans. Unless you’re an anhedonic who’s neurologically incapable of feeling pleasure from music, your emotions can probably be played with by a hundred different tunes.

That’s something Nolan should keep in mind, since it’s possible his nifty neurological trick is going to get old and stop stimulating movie goers. Numerous studies suggest that what matters in music is not lyrics or instrumentation but the sound’s stickiness, defined as the right combination of old and radically new sonic sensations. So, though the Shepard tone never ends, a listener’s patience might.

See also: Science Explains Why Marvel Music is so Forgettable