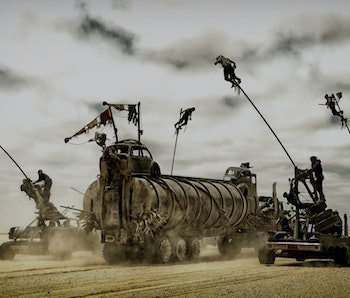 One of the big plot drivers of the Australia-set Mad Max series, and the excellent Fury Road sequel, was the search for “guzzolene,” the slang for gasoline. Government officials are trying to avoid that dystopian future, and Thursday revealed a massive project to build and “electric highway” that will spur its people to switch from gas-powered cars to electrified vehicles.

But even though it’s five times the size of Japan, the Australian state of Queensland has only 5 million people and even fewer electric vehicles, only around 1,000. But that’s not stopping the Queensland government from constructing the 1,000-mile “Electric Super Highway.”

An otherwise regular coastal road stretching along the Coral Sea — home to the Great Barrier Reef — the highway will be dotted with charging stations in 18 towns along the way. The work is expected to be completed over the next six months. For an unspecified “initial phase,” the charging will be free.

“I encourage all governments across Australia to follow suit, particularly as this support will help to provide motorists with increased choice of cars that are cheaper and healthier to operate,” Australia’s environment and roads minister Steven Miles said Thursday. “The future truly is electric.”

And, Miles says, that future is coming fast.

The United States has something similar to this: the “West Coast Green Highway.” Winding through Washington, Oregon, and California — coincidentally the three states with the highest rates of electric vehicle adoption — the program ensures a car port every 25 to 50 miles along Interstate Five. Though the distance between charging stations is streamlined, the cost of electricity varies at each stop.

The Australian government says the decision is based on sound data. In the next two years, fully half of Queensland residents say they’ll be considering the purchase of an electric car, according to the Queensland Household Energy Survey. And, Miles said Thursday, the survey suggests “improvements to public fast-charging infrastructure would further tempt them.”

Elsewhere in Australia electrification is afoot, too: Recently Tesla confirmed it would build a massive solar-and-battery operation for the state of South Australia, which has suffered from energy shortages that have resulted in blackouts in recent years.