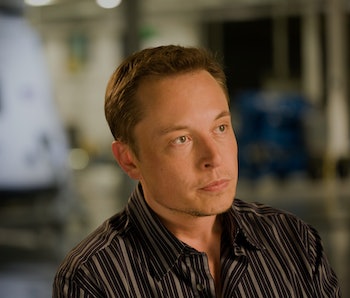 Elon Musk has slammed Facebook CEO Mark Zuckerberg’s “limited” understanding of artificial intelligence. The comments followed an interview with Zuckerberg where he criticized “doomsday scenarios” around these new technologies as “pretty irresponsible.”

“I’ve talked to Mark about this,” Musk said on his Twitter page Tuesday. “His understanding of the subject is limited.”

Musk was responding to Twitter user Darren Cunningham‏, who shared an article with recent comments from Zuckerberg. During a Facebook Live broadcast over the weekend from his house in Palo Alto, California, Zuckerberg took questions from users about the future of technology.

“I watched a recent interview with Elon Musk, and his largest fear for the future was A.I.,” one user asked. “What are your thoughts on A.I. and how it could affect the world?”

“I have pretty strong opinions on this. I am optimistic,” Zuckerberg told viewers. “And I think people who are naysayers and try to drum up these doomsday scenarios — I just, I don’t understand it. It’s really negative, and, in some ways, I actually think it is pretty irresponsible.”

It’s not the first time Musk has criticized Zuckerberg’s understanding of A.I. At the end of last year, Zuckerberg unveiled his Jarvis home assistant, capable of dimming the lights, controlling music and managing security. Jarvis, named after Tony Stark’s computer assistant in Iron Man, is essentially a homegrown version of Amazon’s Alexa. Musk dismissed the project as “really not A.I.”

The Tesla CEO has sounded the alarm a number of times on how artificial intelligence could change our lives in unwelcome ways. In February, Musk told an audience at the World Government Summit in Dubai that “digital super intelligence” would be like meeting an “alien,” and governments will need to stay vigilant.

It’s not that Musk is against artificial intelligence in general, with Tesla actively pursuing research in computer-driven cars. The company started shipping cars last October with the necessary cameras and sensors to enable fully autonomous driving at a later date, and the system will harvest driving data from these sensors to improve the software and gradually make the ride as smooth as possible.

But Musk has expressed fear that these intelligent systems are advancing far faster than people think. Because hardware is improving exponentially at the same time as software, the two components of future A.I. systems could reach impressively powerful levels far sooner than people think.

“Whenever you have a double exponent it’s going to be very difficult to predict, and people’s predictions are always going to be too conservative,” Musk said earlier this month during a Q&A session at the ISS R&D conference in Washington, D.C.

Although this has been Musk’s message for a while, recent comments drew ire from researchers growing weary of his warnings. At the National Governors Association earlier this month, he told state governors that “A.I. is a fundamental risk to the existence of human civilization, and I don’t think people fully appreciate that.” A number of A.I. researchers said that he was being needlessly alarmist, with Pedro Domingos, an A.I. researcher based at the University of Washington in Seattle, summing up his thoughts on Twitter with a single word: “sigh.”

Musk has his share of supporters. Tim Urban, the writer behind explainer site Wait But Why, has written about how artificial intelligence will impact humanity. Musk described the article on Tuesday as “excellent.”

Urban has worked with Musk previously. In April, Wait But Why published a guide to neural lace startup Neuralink. The technology could allow human brains to interface directly with computers, something Musk believes could help achieve a symbiotic relationship with future artificial intelligence.

But Musk may need to get creative if he wants to convince Zuckerberg and others of the possible dangers around A.I.