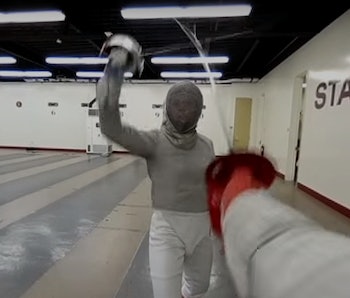 Over the past year and a half, Stanford University’s athletics department has been teaming up with its video team to throw fans right in the middle of their NCAA sports teams with the help of virtual reality.

The fencing is a bit goofy and the athletes are clearly having fun with the project, showing the lighter side of one of the sport’s best collegiate teams.

At one point, they even have one fencer stand behind the camera and hold his sabre out, acting as the audience during a blade-work drill. After that, the fencer facing the camera begins an all-out attack against the camera, showing the audience what it looks like to be in the center of the action during a fencing tournament.

Other videos, which include a women’s volleyball practice and the football team running onto the field, are designed to show Stanford students and fans what it’s like to be part of the team.

More like this
Gear
Feb. 1, 2023
Samsung Can’t Resist the Call of the Metaverse
By James Pero
Gear
Jan. 23, 2023
Why Microsoft thinks ChatGPT (and not the metaverse) is its future
By Ian Carlos Campbell
Innovation
Jan. 25, 2023
Starship orbital flight: SpaceX successfully loaded the rocket with over 10 million pounds of propellant
By Mike Brown and Molly Glick
LEARN SOMETHING NEW EVERY DAY.
Related Tags
Share: