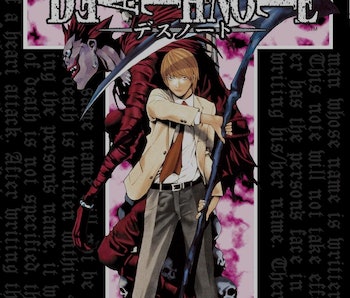 Fans in attendance at San Diego Comic-Con this past Thursday were treated to an eerie new clip from Death Note, the remake of the popular manga and anime franchise coming to Netflix on August 25. In the clip, Light Turner (Nat Wolff) meets Ryuk, the terrifying death god voiced by Willem Dafoe who gives Light the “Death Note,” a cursed notebook in which whoever’s name is written are killed. While there is plenty yet to be revealed in the final, full movie, the clip hints at a severe change to the rules established in the original Death Note from Japan.

In the original manga written by Tsugumi Ohba and illustrated by Takeshi Obata, the owner of a Death Note can kill anyone so long as they have their full name and face in mind. So if you want to kill “John Smith” from down the block, just write his name in the Death Note and other John Smiths will be unaffected. However, if a cause of death isn’t specified (i.e. “John Smith, car crash”), the victim’s cause of death will be a heart attack.

In the new movie from director Adam Wingard, Light writes the name of his tormentor in the Death Note, but Ryuk insists that Light write a cause of death. “How?” Ryuk asks. Light writes a particularly gruesome one, “decapitation,” and the clip ends before the mayhem begins.

The heart attack rule is just rule number four in the whopping 50-plus regarding the use of the Death Note. And it’s possible that the rule is still in place in the new movie, and Ryuk was just insisting in order to show Light (and the audience) the Death Note’s awesome power. But even then, the rule begins to complicate the movie. It’s possible in comic books to explore every technicality, but it’s unlikely that the movie, targeted at a more global audience, will have the time to explore even a fraction of them.