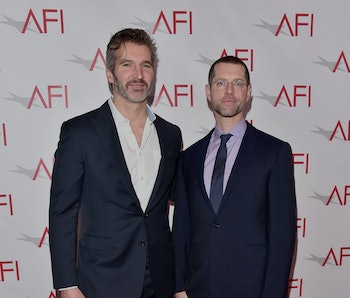 As Game of Thrones comes to a close with just two short seasons left, creators David Benioff and D.B. Weiss already have a new show on the horizon. On Wednesday, HBO announced the premise of Benioff and Weiss’s new show Confederate, which imagines a dystopian version of America where slavery still exists.

Here’s the premise of the show, from HBO:

CONFEDERATE chronicles the events leading to the Third American Civil War. The series takes place in an alternate timeline, where the southern states have successfully seceded from the Union, giving rise to a nation in which slavery remains legal and has evolved into a modern institution. The story follows a broad swath of characters on both sides of the Mason-Dixon Demilitarized Zone – freedom fighters, slave hunters, politicians, abolitionists, journalists, the executives of a slave-holding conglomerate and the families of people in their thrall.

As the HBO press release explains, Benioff and Weiss have been kicking the idea around for years, originally planning it as a film. But their experience on Game of Thrones enticed them into making it an HBO series.

Confederate’s premise isn’t exactly novel (alternate histories about the Civil War are common and The Man in the High Castle did the same thing with World War II), but Confederate is sure to come under scrutiny since Game of Thrones has already garnered criticism for its handling of race. As it will air around the same time as Westworld Season 2, it marks a pivot toward sci-fi for HBO. The network will also run one or more Game of Thrones spin-offs, but Benioff and Weiss will not be involved.

Game of Thrones is currently in its seventh and penultimate season. The eighth and final season does not yet have a release date. Confederate’s production will begin after Game of Thrones Season 8, so it will air in 2019 at the earliest.