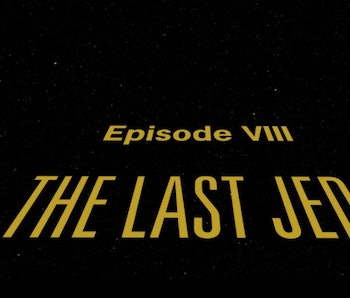 Crafting the opening crawl for a Star Wars movie is apparently like “writing a haiku” at least according to Rian Johnson. The director of The Last Jedi has talked candidly about his struggles with choosing the right words to set up the next chapter in the epic sci-fi saga. And, he’s also proud of one specific word he managed to get into the text.

On Tuesday, the Los Angeles Times published an interview with Johnson, conducted just after the Star Wars presentation at the D23 conference July 15. Johnson revealed that he had a tough time with his first few drafts of the opening text crawl. “I just started writing the draft. I wrote something, and it was terrible,” he said. Johnson then said he watched a behind-the-scenes documentary with George Lucas in which the Star Wars-creator likened this kind of exposition to the minimalism of haiku. “ It’s like a poem, there’s very little room for error in trying to get it just right. Which is awesome, it’s really fun,” Johnson said.

After making some jokes about the word “poop,” Johnson admitted he was very proud at getting the word “decimated” into the new opening crawl. So now, the question is who or what has been decimated before The Last Jedi even begins? Is it part of the Republic Fleet? Or Luke Skywalker’s feelings?