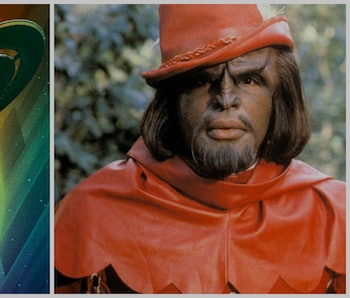 The Klingons on Star Trek: Discovery look different than Klingons on all previous versions of Star Trek. And now, one of the producers of the new show has gone on record saying he’s heard that Trekkies are concerned, and that he hopes they can get over it. The funny thing is, there’s actually a precedent for this kind of thinking, from none other than Trek-creator Gene Roddenberry himself.

On Monday, one of Discovery’s executive producers, Aaron Harberts revealed to Entertainment Weekly his thoughts on the new Klingons looking different than they’ve appeared in the franchise before. “We will introduce several different houses with different styles. Hopefully, fans will become more invested in the characters than worried about the redesign,” he said. He also added that there is a total historical precedent for Klingons looking a little different throughout all of Star Trek. “In the different versions of Trek, the Klingons have never been completely consistent.” And the thing is, not only is Harberts right about this, his comments on a variety of different Klingon designs goes back to statements made by Gene Roddenberry in the ‘70s.

When the Klingons were totally redesigned for the opening sequence of Star Trek: The Motion Picture in 1979, Roddenberry told the magazine Cinefantastique, that “Just as there are different races of humans, there are different races of Klingons, and the Klingons seen in Star Trek: The Motion Picture are not the same race as the ones we saw on the original series.” Read back-to-back with the contemporary Harberts comments, this pretty much seems like the same thing. With that in mind, it’s pretty easy to conclude that Gene Roddenberry probably wouldn’t have had a huge problem with the Klingons being redesigned again for Discovery, as these new versions of the characters were just yet another iteration of their extensive biodiversity.